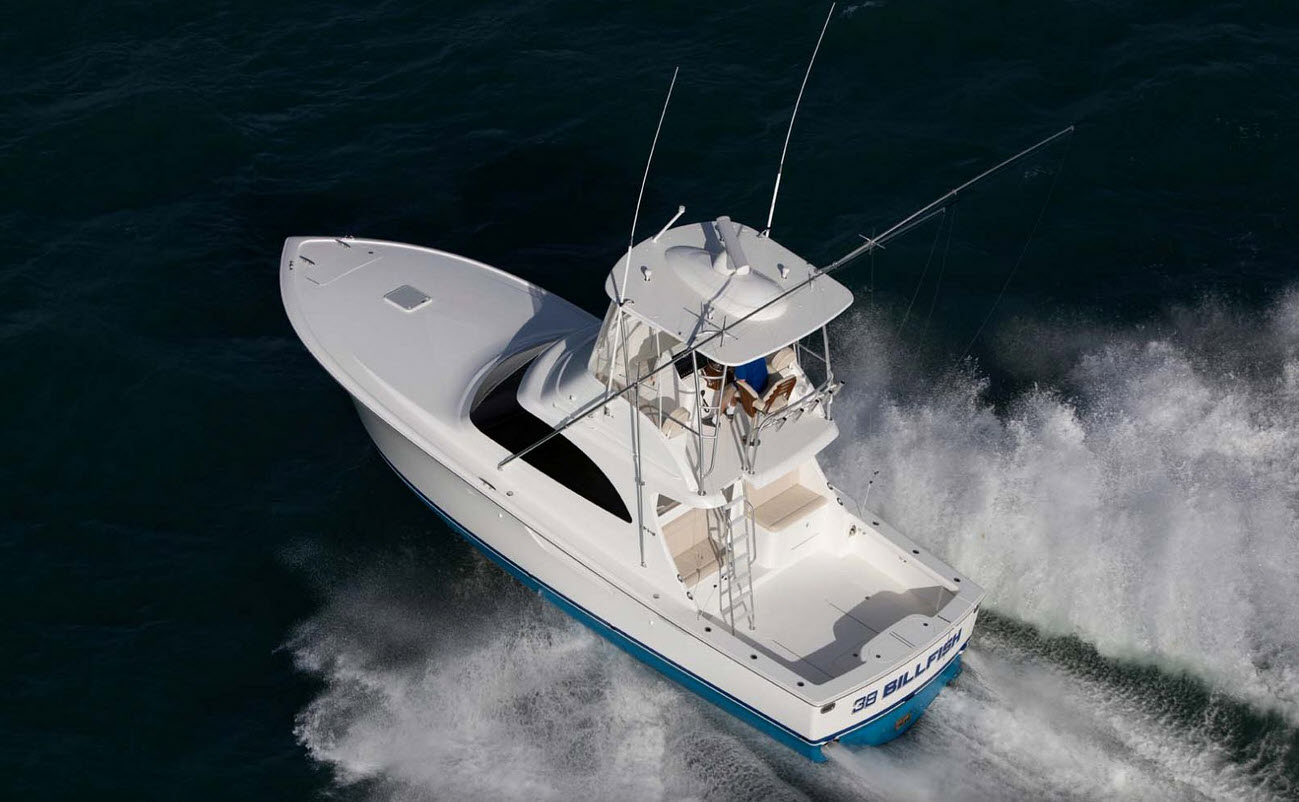 Viking Yachts for sale on the pre-owned market continue to be hot, especially late-model Convertibles.

Are you considering listing your Viking Yacht for sale? As one of the leading Viking dealers and brokerage firms in the U.S., SI Yachts follows the market trends closely each month to ensure that we can provide our clients with expert advice, realistic expectations, and unprecedented customer service. The first quarter of 2019 saw the launch of a new model at the Viking VIP Event and Miami International Boat Show, as well as several late-model, pre-owned Viking Yachts come on the market. If you would like to speak with one of our Viking Yacht specialists about your current yacht or the availability on a new one, please call us at (718) 984-7676 or via email at Sales@SIYachts.com.

In our 2018 Viking Yacht Market Recap, there were several take-aways from the SoldBoats.com data over the 12 month period. Because our focus is on newer inventory, all pre-owned Vikings older than 2000 or outside of the U.S. were excluded from the report. These numbers are solely focused on later model, U.S.-based yachts.

2018 saw an increase in pre-owned Vikings sold from 2017 by 9 vessels, but were almost identical in average price of each yacht. Additionally, the average length of time a pre-owned Viking spent on the market was 10 months. 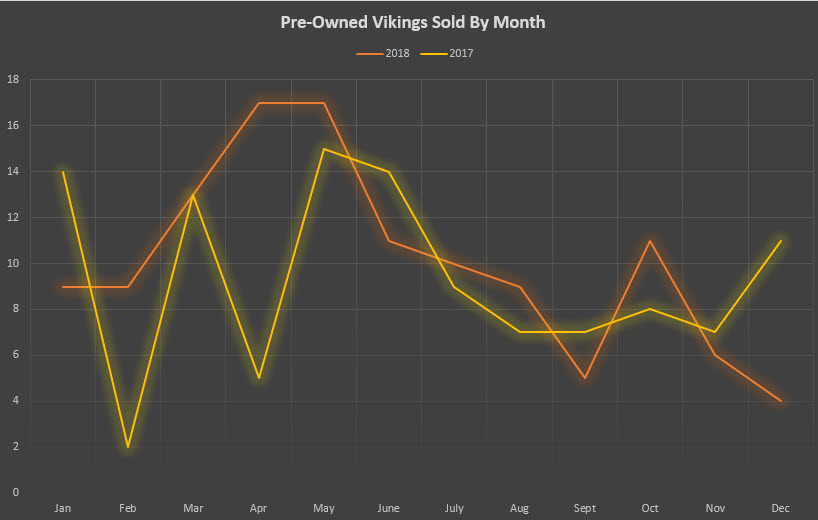 The big story for the first quarter of 2019 was the number of Vikings that sold in 5 months or less. About 70% of all boats sold were done so in less than 5 months and several of those yachts were sold in less than 3 months! Late model boats that have been well-maintained, priced correctly and advertised sufficiently seemed to be sold fairly quickly.

The decline in overall dollars when comparing quarters is primarily due to several larger yachts sold in the first quarter of 2018 that 2019 just didn't have. This includes a 2016 92 Enclosed Bridge as well as 3 Viking 76's, all of which were 2010 or newer. The first quarter of 2019 did not have as big of boats sold and thus greatly affected the overall dollar value and average deal price when comparing the two quarters. There were no pre-owned Vikings over 80-feet sold and only one 2010 76' Enclosed Bridge was sold in Q1 2019. Still, there were many yacht sold in the 48 Convertible to 61 Convertible model range. The Viking brokerage market continues to remain strong, especially for quality listings.

Below are all of the pre-owned Viking Yachts sold from January 1st, 2019 through March 31st: 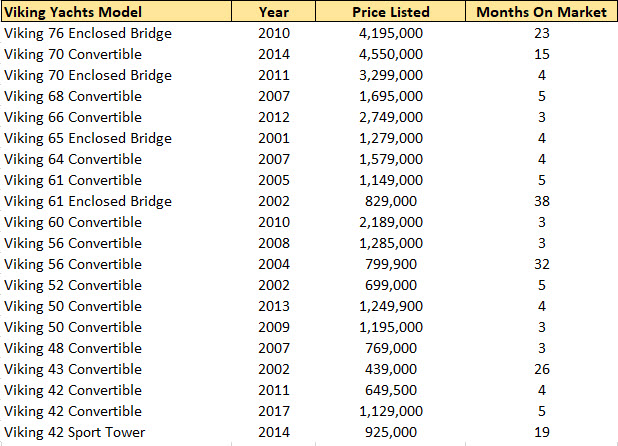 The first quarter of 2019 for Viking Yachts can be a time of new inventory coming on the market. With the end of every Fort Lauderdale Boat Show, the Viking VIP Event, and the Miami Yacht Show, new boats being purchased usually results in the trade-in of an existing boat or a brokerage boat being offered on the market place.

Since the beginning of February 2019, there have been 44 pre-owned Vikings newly listed on the market between 42 and 80 feet. More than half of these Vikings are between the 48 Convertible and the 58 Convertible, so a lot of mid-range sportfishing boats available that are late-model. Here are several select pre-owned Vikings that may or may not be listed with SI Yachts. 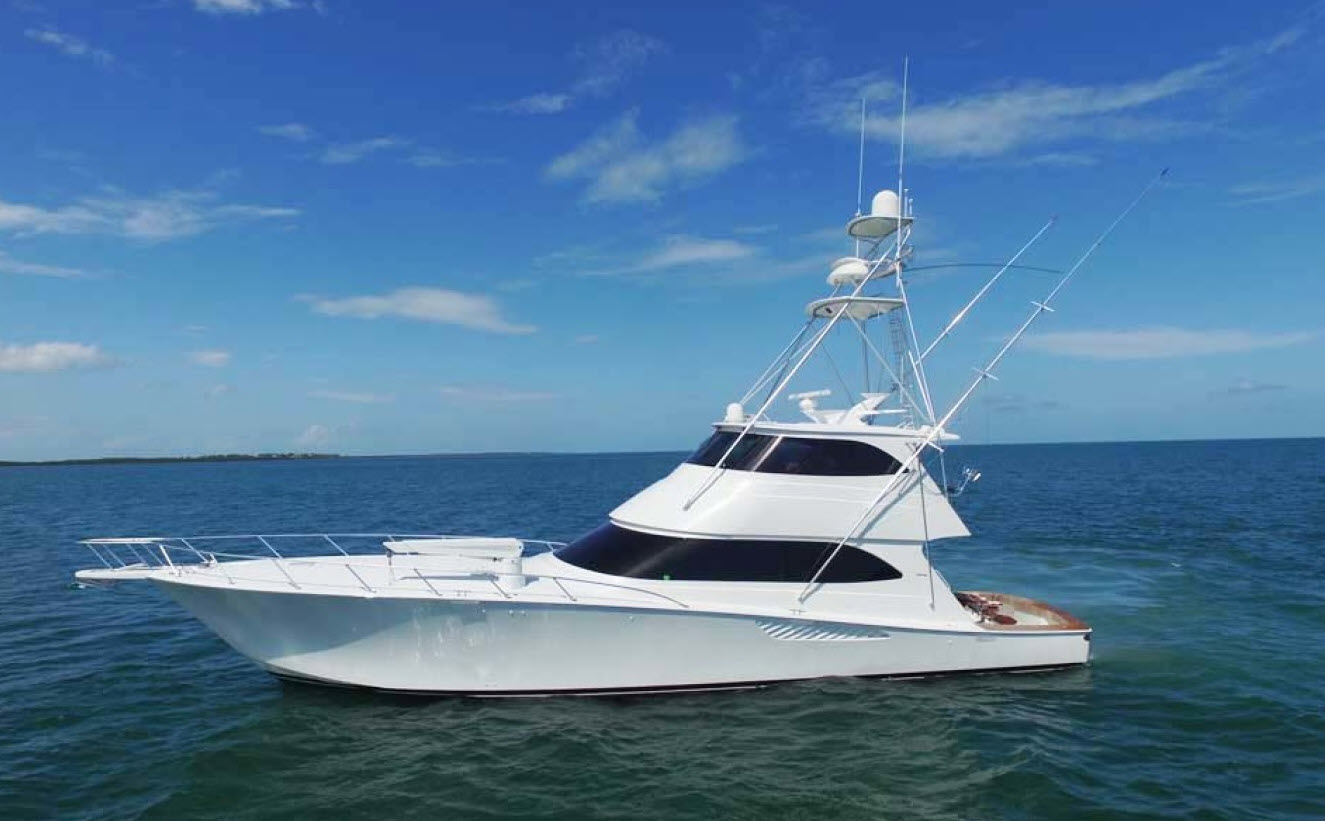 "Aldente", the 70' Viking Enclosed Bridge is in immaculate condition and as "turn-key" as you can get. The MTU 2600 HP engines are upgraded from the base engines and other features have been added including a Seakeeper gyro, Release fighting chair, Sea Recovery water maker, and an updated galley. 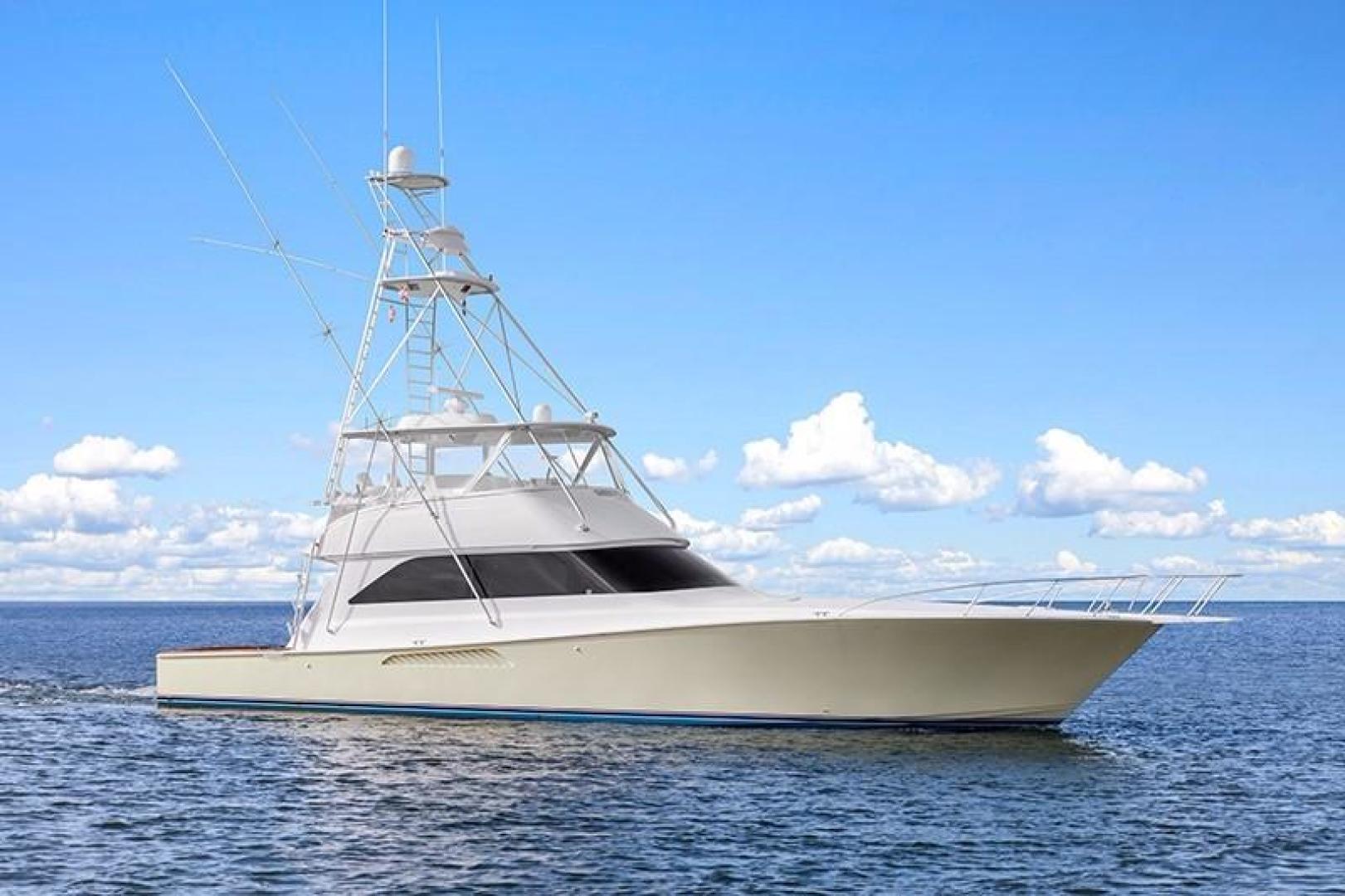 Brand-new to the market, Out-A-Line is an excellent example of the popular 61 Convertible and is in great condition. She features a 3-stateroom, 2-head layout as well as twin MTU V-2000 M91 1550HP engines. She is fully rigged and ready to help you win the next bluewater tournament. 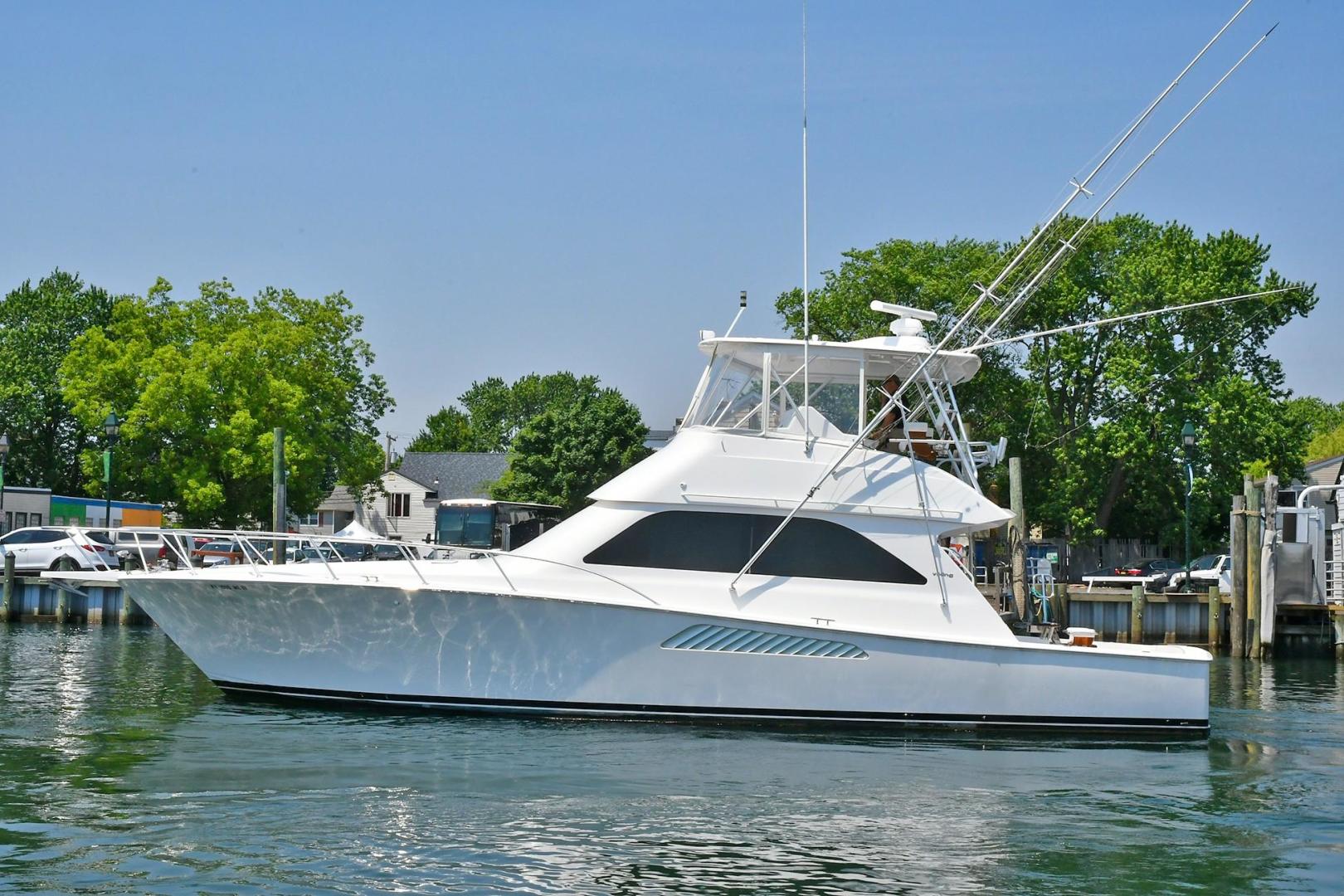 "Barbara Ann" is a very well-cared for Viking 48 Convertible that was mostly used for cruising and only lightly fished. She features the upgraded 1100HP Common Rail MAN engines with only 1,000 original hours. The large flybridge space can seat 8 people and she offers the 3-stateroom, 2-head layout.

With the influx of Vikings on the market in Q1 and a slight drop in sales compared to 2018, there are signs that point to this becoming a buyer's market although it's still too early in the year to tell. The positive take-way in looking at the actual inventory sold in 2019 so far is that the vast majority of the late-model boats were sold in 5 months or less. If you own a Viking that has been well-maintained, has a decent number of options, low-to-average hours, and priced competitively, there is no reason that boat should be on the market longer than 4-5 months. Use our "What's My Yacht Worth" form to get a comprehensive market analysis of your Viking emailed to you from one of our Viking Yacht specialists. 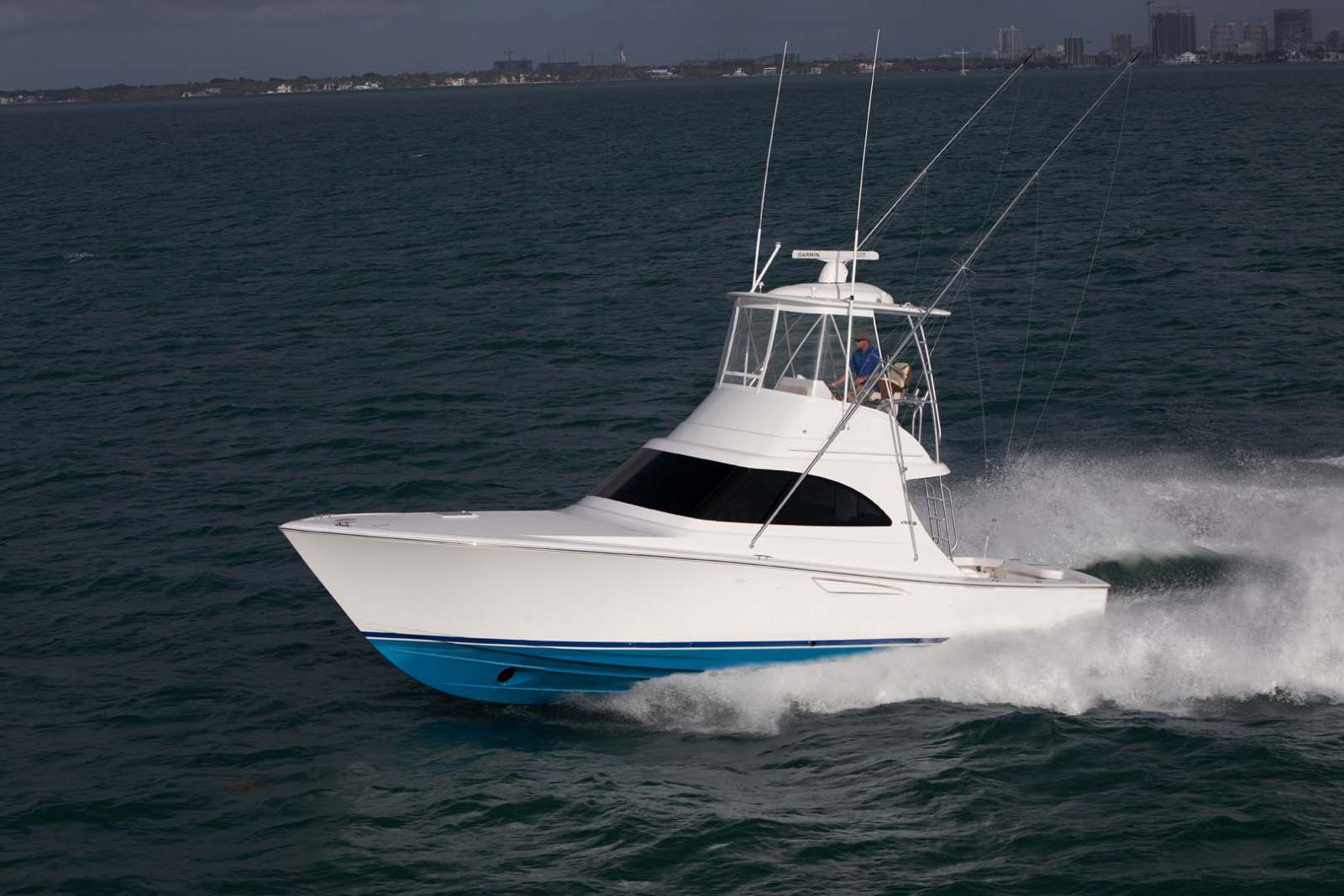 The new Viking 38 Billfish made its world debut at the VIP event in February followed by the Miami Yacht Show. There will be a brand-new Viking 38 Billfish headed to Staten Island Marina in the summer of 2019. While the 38 Billfish was designed with the same concept in mind as its predecessor, the 37 Billfish, the new model does feature a much larger cockpit space as well as some slight design/shape changes. 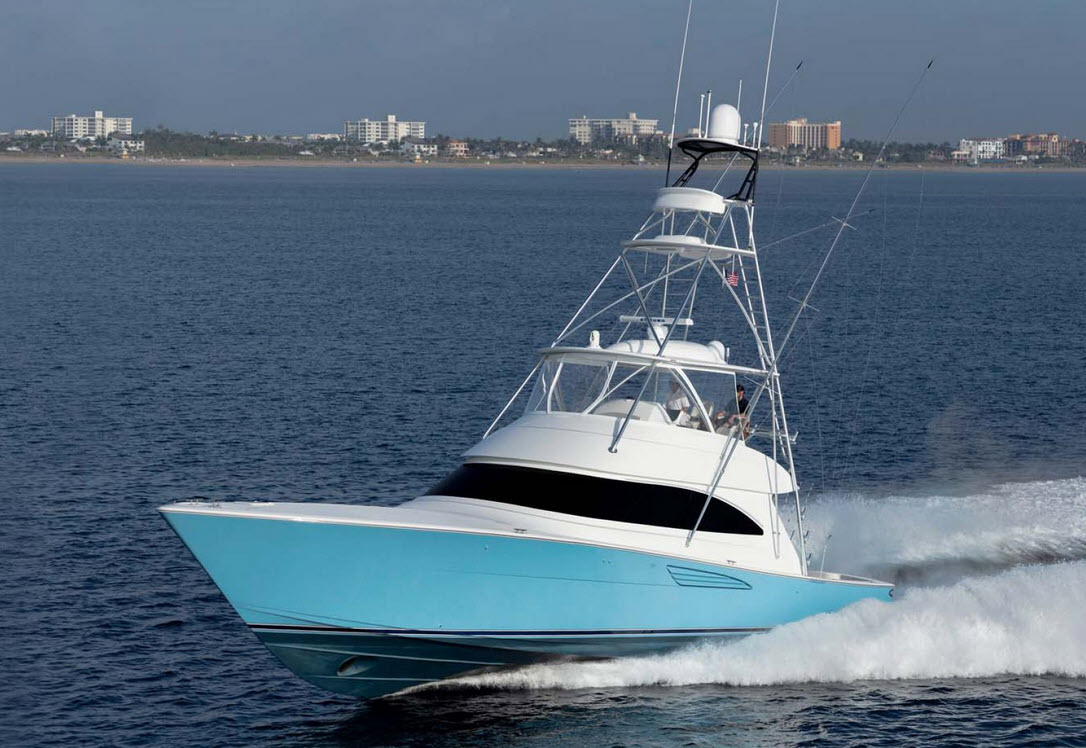 The new Viking 58 Convertible is also heading to Staten Island Marina and will be available to tour in June. 1600HP MTU V10 2000 M96L engines will propel you to over 40 knots while the 165 square foot cockpit space leaves plenty of room for gear and the crew to maneuver freely. The 58C is a juxtaposition in itself as it is a hardcore fishing battle-wagon at heart with the interior luxuries and accommocations of a motor yacht.

Other Viking-Related Articles Of Interest:

Viking Yachts 72 Convertible: Battle Tested And Approved goes into the features and details of the mind-blowing 72C. At 45 knots and a 200+ square foot cockpit space, the Viking 72C may be the most prolific sportfishing yacht on the water today.

Viking Yachts Announces Valhalla Boatworks which will be their new luxury center-console line. Valhalla boats will be built with a patented stepped hull design, equipped with the triple or quad outboard engines, and will be outfitted by Viking's own subsidiary companies when it comes to electronics and towers.

A Resource Guide To Buying A New Viking Yacht answers a lot of the questions new boaters or new boat buyers have about Viking Yacht ownership. From quality construction techniques to understanding the different models to where to see the boats, this resource guide is informative and helpful for the "newbies".

The story behind the new Viking Yachts 58 Convertible talks about the evolution of the model from its original, popular version in the 1990's. SI Yachts will have a new Viking 58 Convertible available in the Summer of 2019.