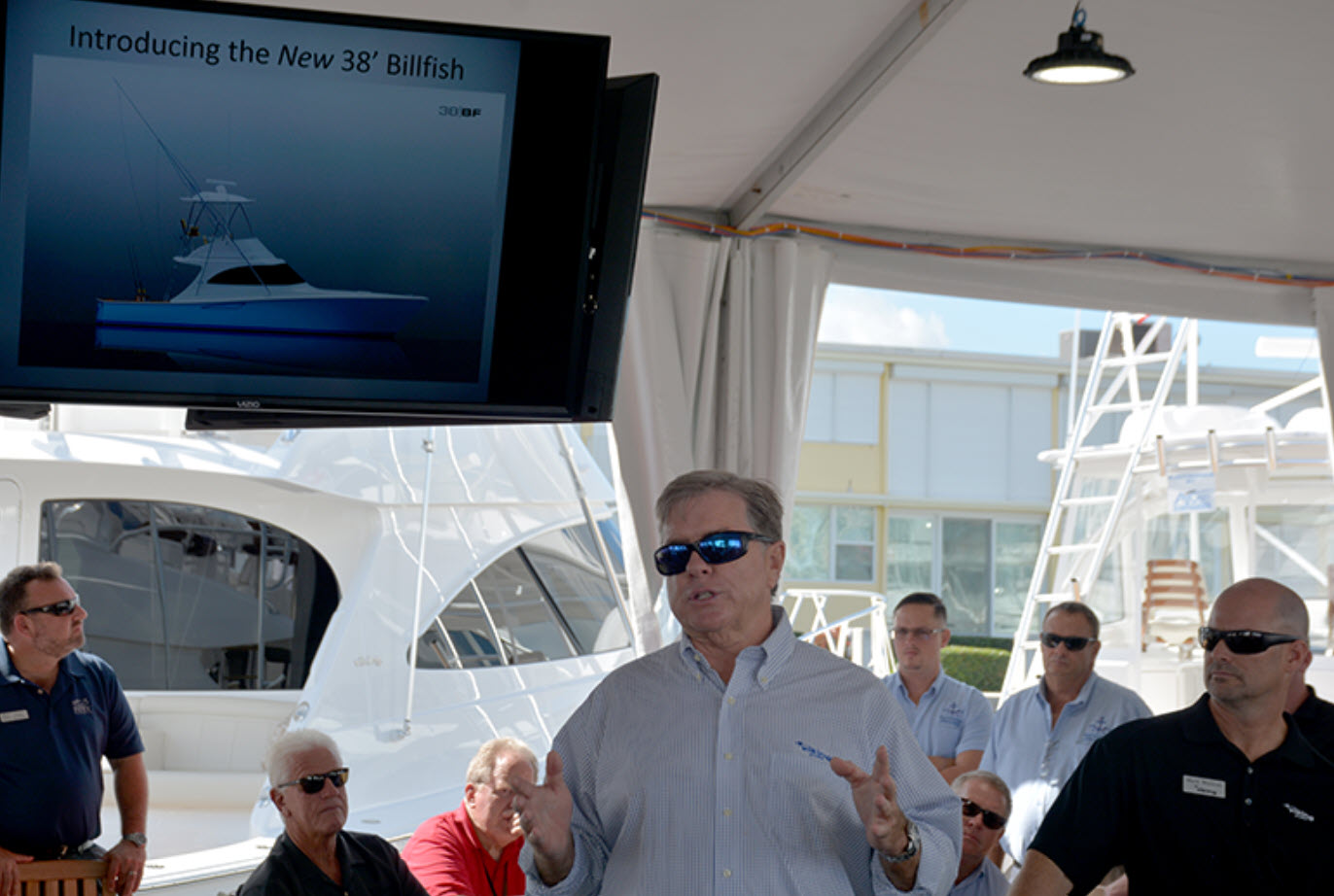 The new Viking 38 Billfish was just professionally photographed by Forest Johnson and the images just released. You can view the new photos of the Viking 38 Billfish on our latest blog post here. The new model successfully debuted at the Viking VIP Event and the Miami International Boat Show this past February. Look for SI Yachts to have a 38 Billfish arriving at our Staten Island Marina office in early Summer 2019. 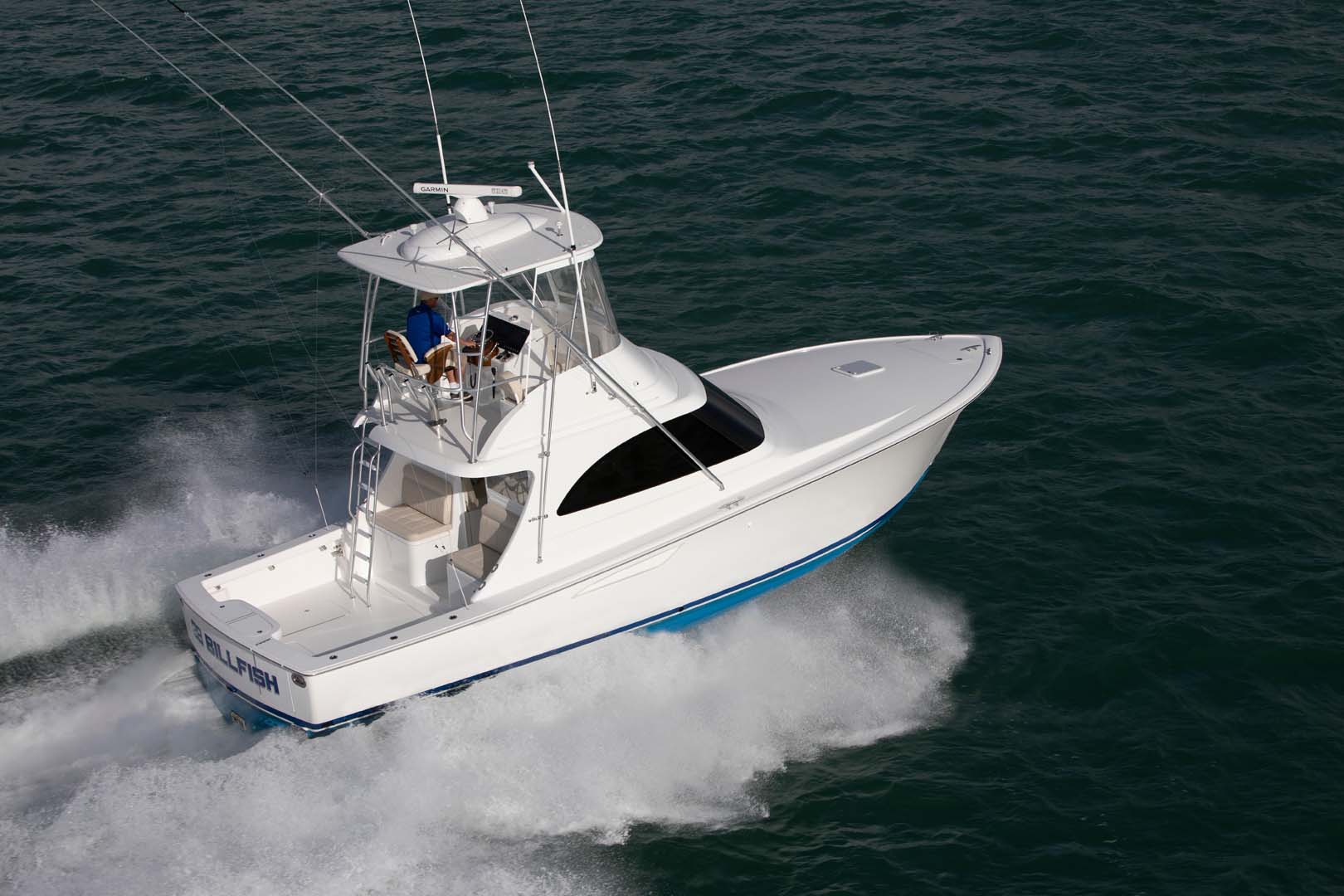 Viking Yachts has just released new photos of the 38 Billfish cruising along the river outside of the New Gretna factory. As you can see below from the boat's profile, the 38 Billfish is very similar in style to the 37 Billfish. 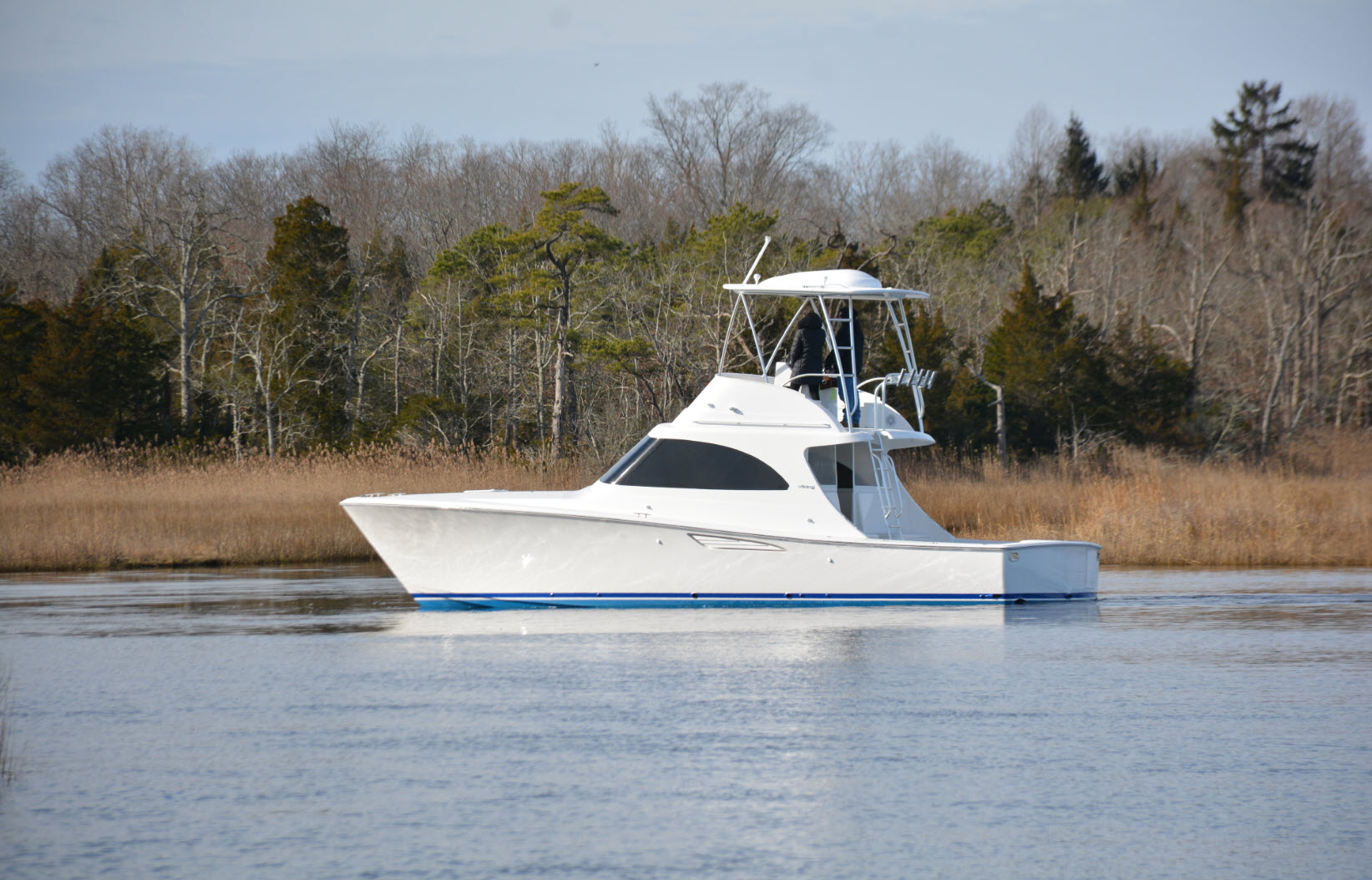 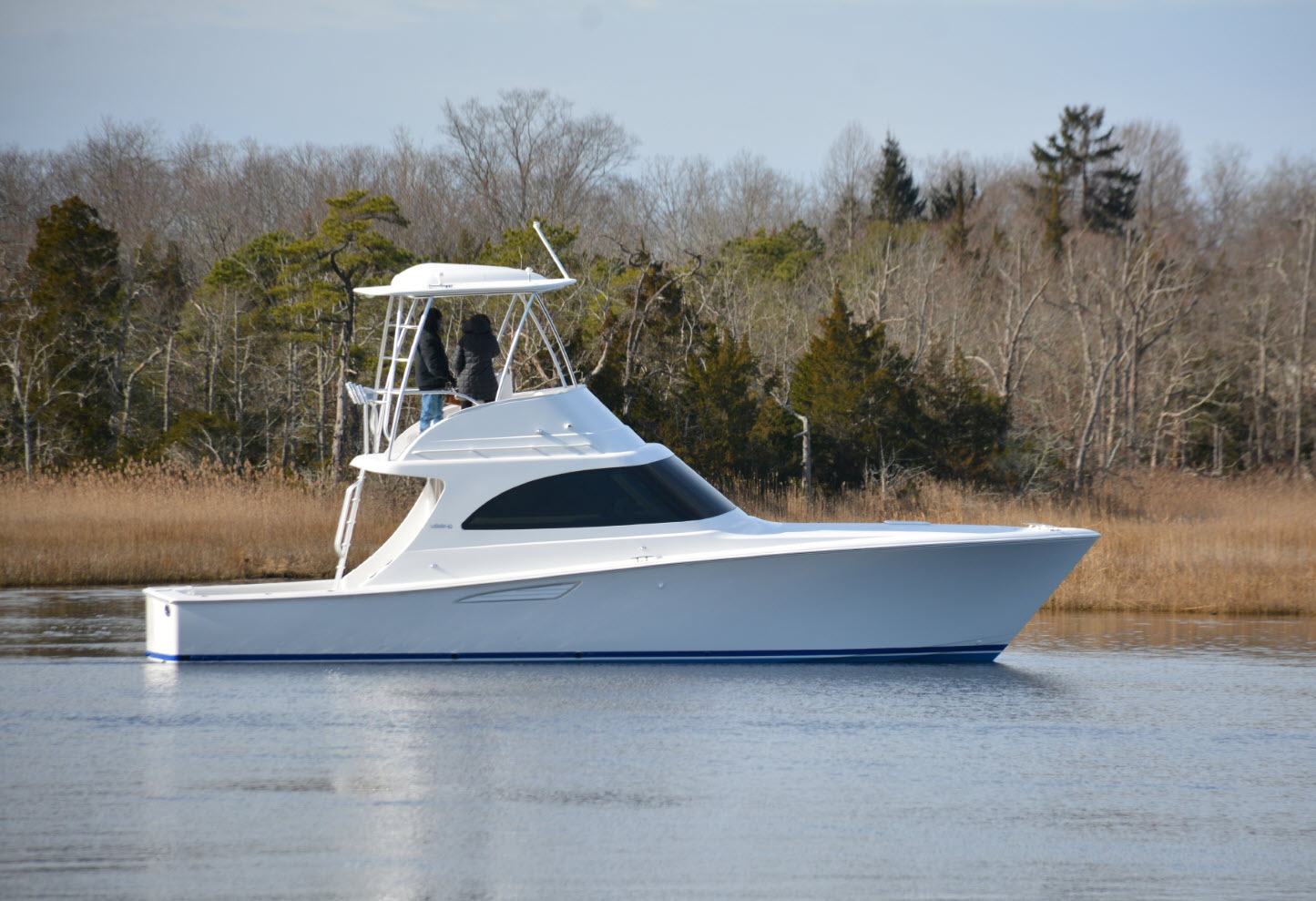 Additionally, they've included a shot of the galley, storage, and microwave on the 38 Billfish with Viking's signature cabinetry work. This is a great addition for center-console owners looking to add a little more comfortability to their ride. 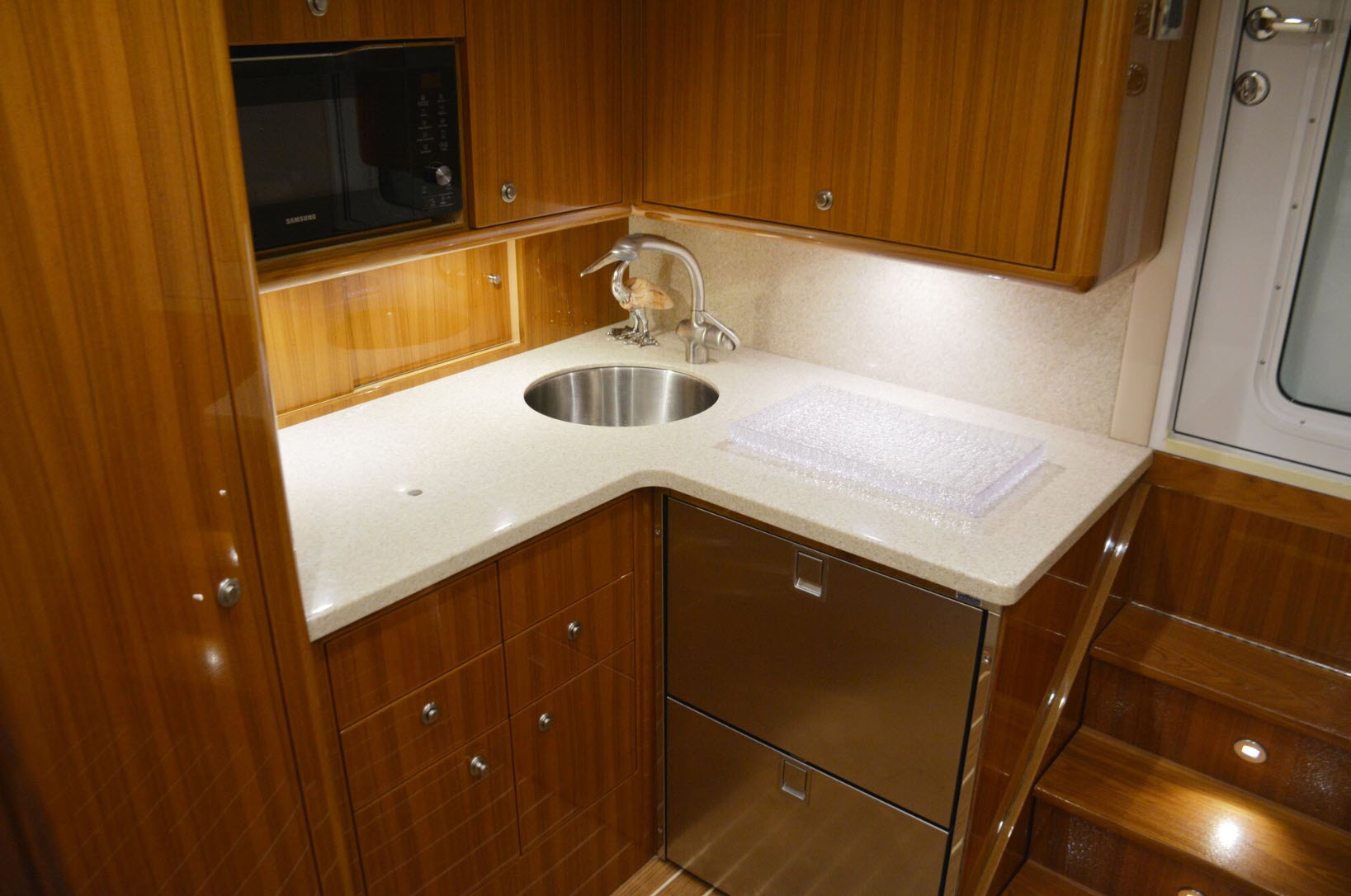 The head on the 38 Billfish is surprisingly large, certainly much bigger than the cramped bathrooms stuck in the hull of most center-consoles. The stand-up shower looks to have plenty of room and there's cabinet storage under the sink for essentials. 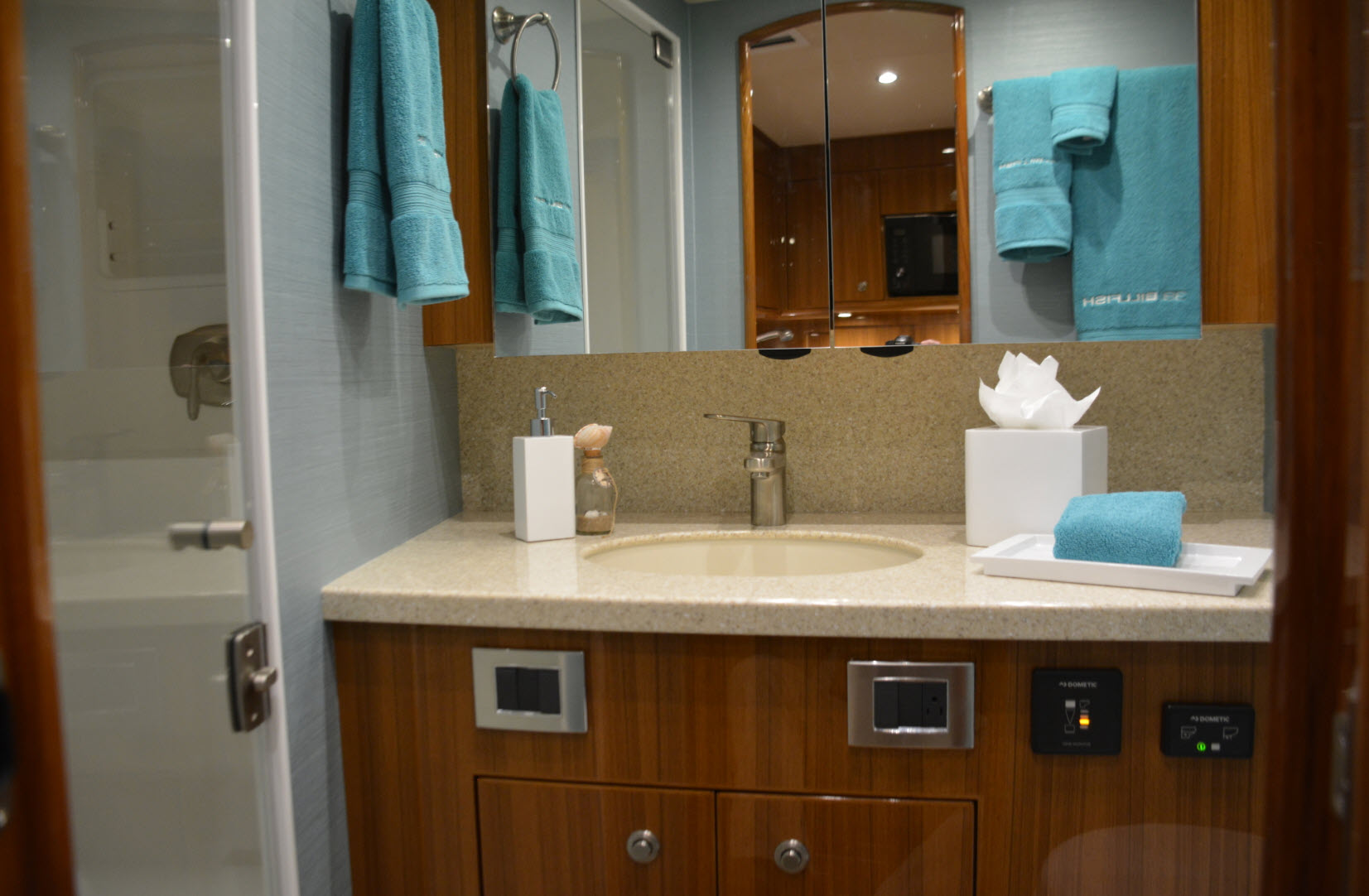 SI Yachts will keep you updated as more information on the new Viking 38 Billfish comes available. See her at the Miami Yacht Show in February!

And just like that, Viking had everyone talking again. With the beginning of the Fort Lauderdale Boat Show just minutes away from opening, Viking Yachts President and CEO Pat Healey announced to all the dealers in attendance the plans to debut three new models in 2019. The new Viking Yachts 38 Billfish will premiere at the Viking VIP Event in February 2019, much like its predecessor did the 37 Billfish just two years prior. The more public debut for the 38 Billfish will be at the 2019 Miami Boat Show. Viking will follow up the 38 Billfish premiere with two additional models, the 38 Open and a 46 Billfish, at a later date in 2019 that has yet to be announced. All of this comes on the heels of a very busy year for Viking Yachts where many of their new models like the 68 Convertible, 58 Convertible, and 44 Convertible were a resounding success. Viking's recent multi-million dollar commitment in its factory and technology has really been put to use with new models in almost every category coming to fruition.

The 38 Billfish and 30 Open are generally entry model yachts, perfect for center-console owners. If this will be your first Viking purchase, we suggest you take a moment to read the Resource Guide To Owning A New Viking Yacht. 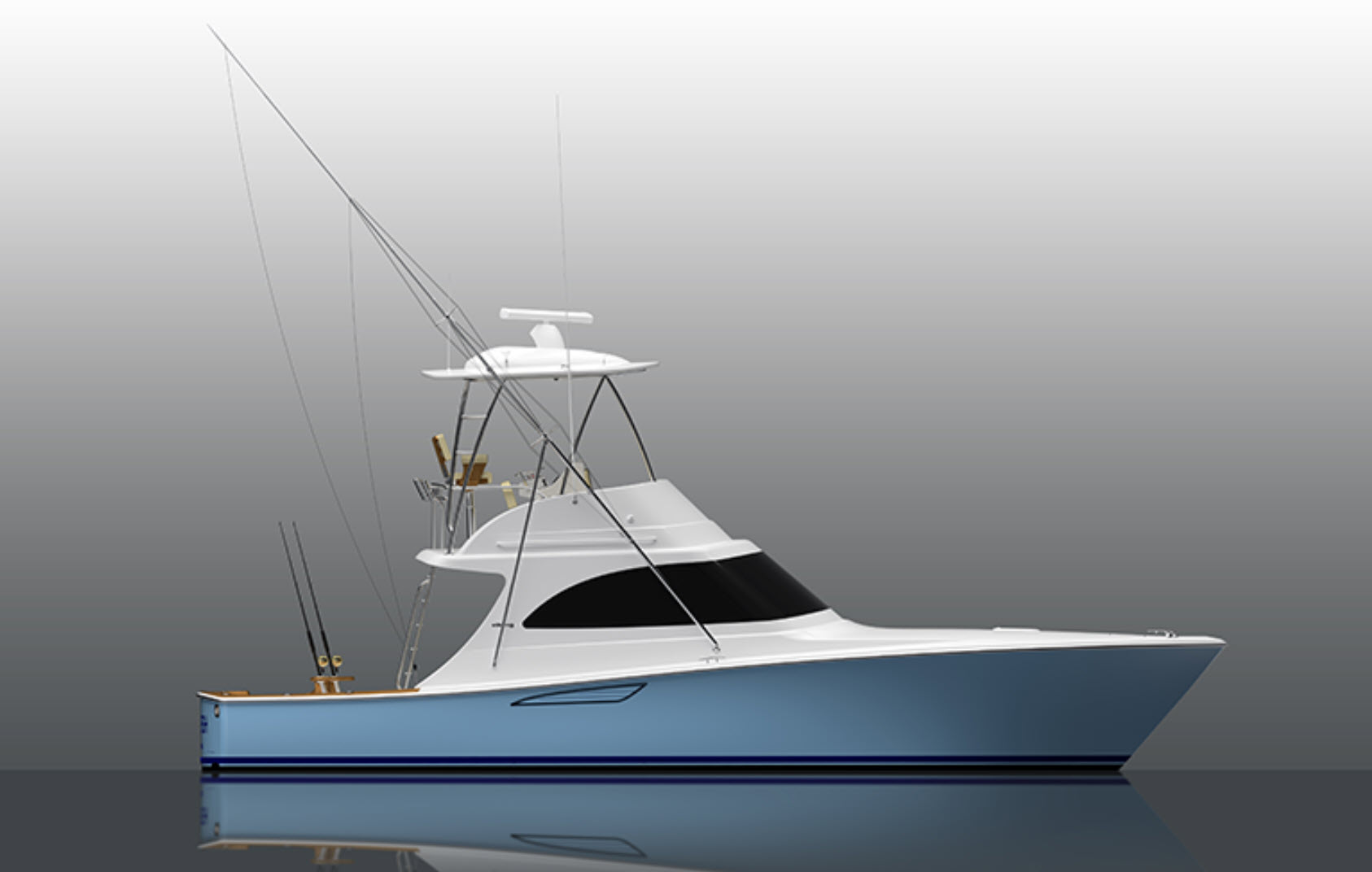 Looking at the new 38 Billfish, you will immediately recognize the same lines and style as its predecessor, the 37 Billfish. The 37 Billfish was widely successful because it was simply so much fun to drive. Designed for the owner/operator, the 37 was simple to maneuver, easy to maintain and offered all of the capabilities of a much larger sportfish at under 40-feet. Large center-console owners particularly liked the fact that they could migrate into a boat that wasn't too large in size and offered the comfort of a large interior and the reliability of diesel inboard engines. The new 38 Billfish is designed and built with that same DNA and will undoubtedly appeal to today's luxury center-console owner that wants a little more comfort on board.

Much like her larger siblings, the 38 Billfish is incredibly fishing-oriented. The 109 square foot cockpit is not only the biggest in its class, it also comes equipped with an abundance of rod holders, massive live-well, fish boxes, tons of storage, and Viking's signature Observation Mezzanine that is so popular among owners. 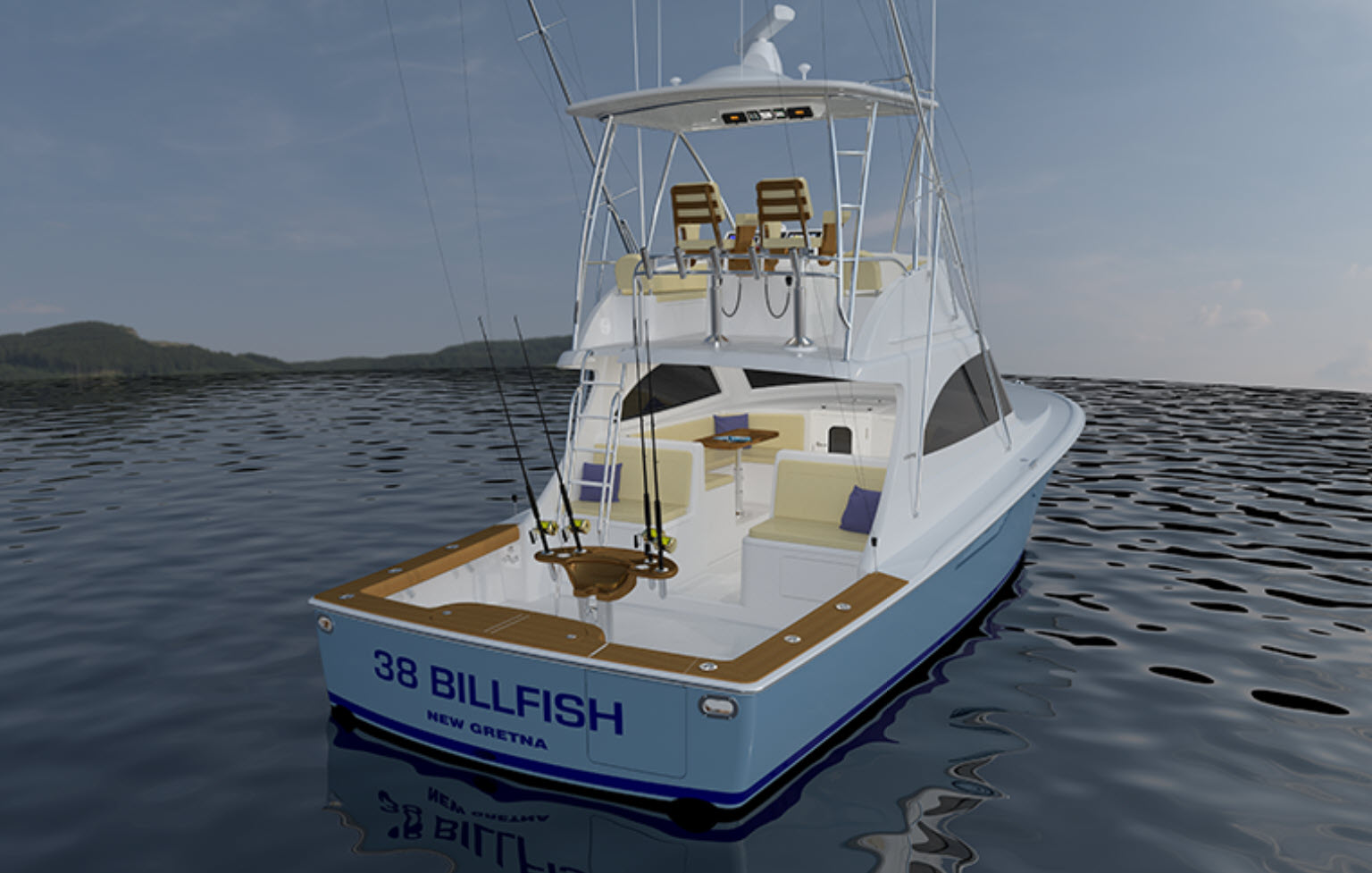 The flybridge helm on the new 38 Billfish is also a treat for the owner/operator. Not only are you naturally higher than you would be in a center-console, the centerline, walk-around helm command center offers exceptional visibility and lots of additional seating for guests. While one helm chair comes standard, owners have the option of adding a second along with having seating in front of the helm station and lounges both port and starboard. 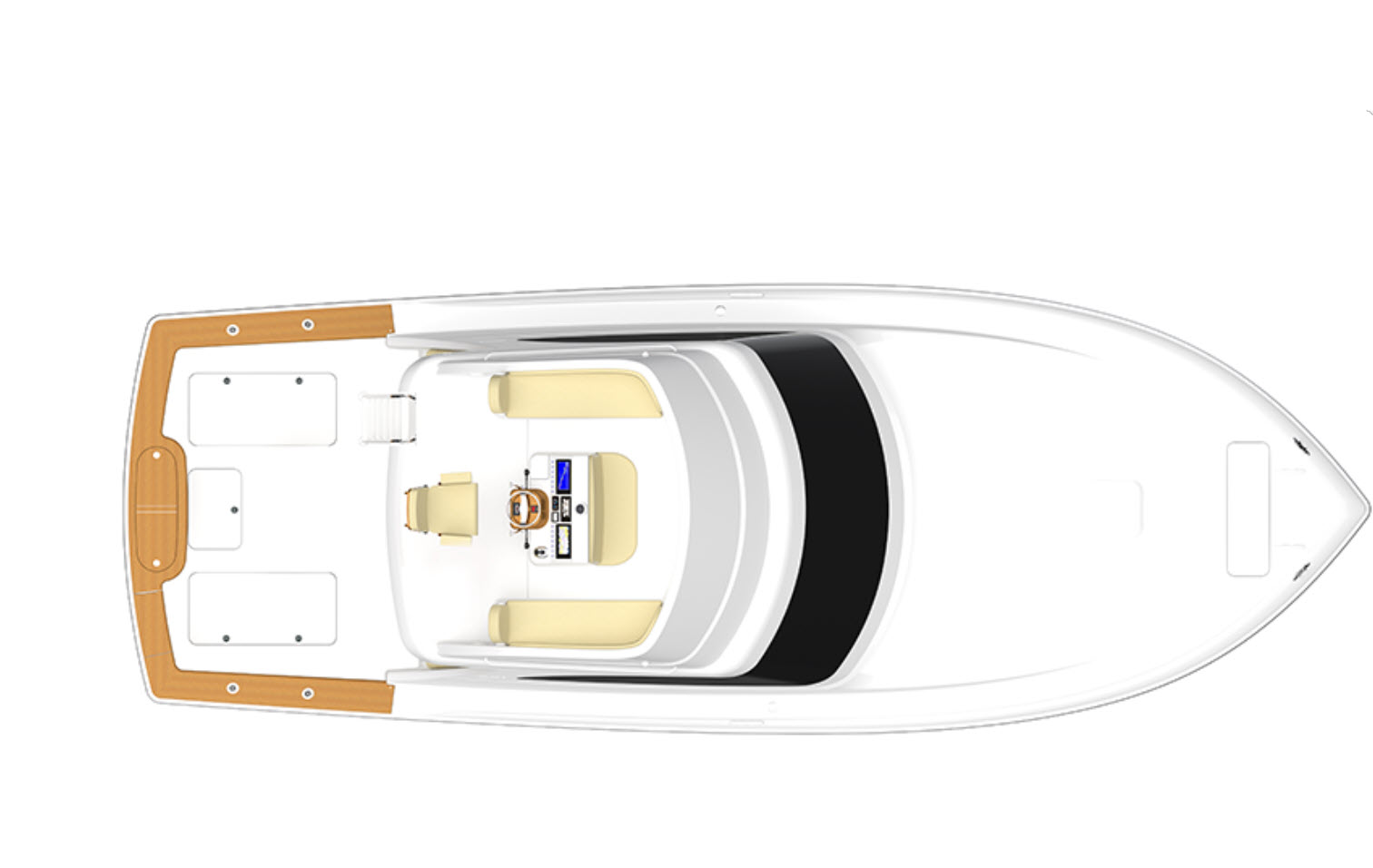 Like all Vikings, the interior accommodations of today's sportfishing yacht are nothing like they were 20 years ago. The spaces below deck are given just as much attention from a layout, function, and accessory standpoint as the fishing areas outside the salon. On the 38 Billfish, there is a large forward stateroom that can either be outfitted with a queen-sized berth or crossover bunks depending on how it will be used. The stateroom also features lots of storage spaces including hanging lockers. Just outside the stateroom is an enclosed head with a shower along with a living area that includes a well-equipped galley. The rest of the command deck features a U-shaped dining area and extra seating. 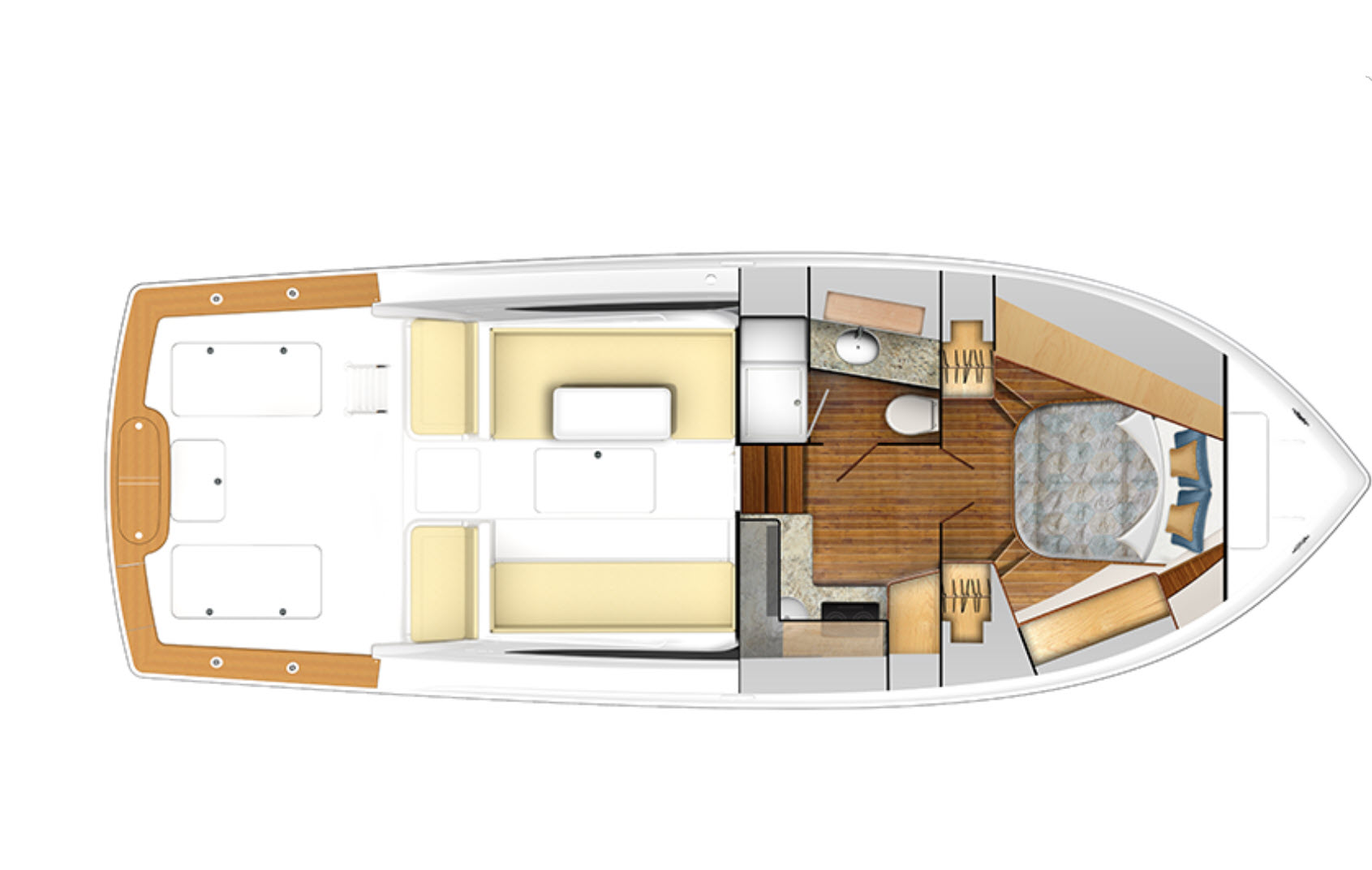 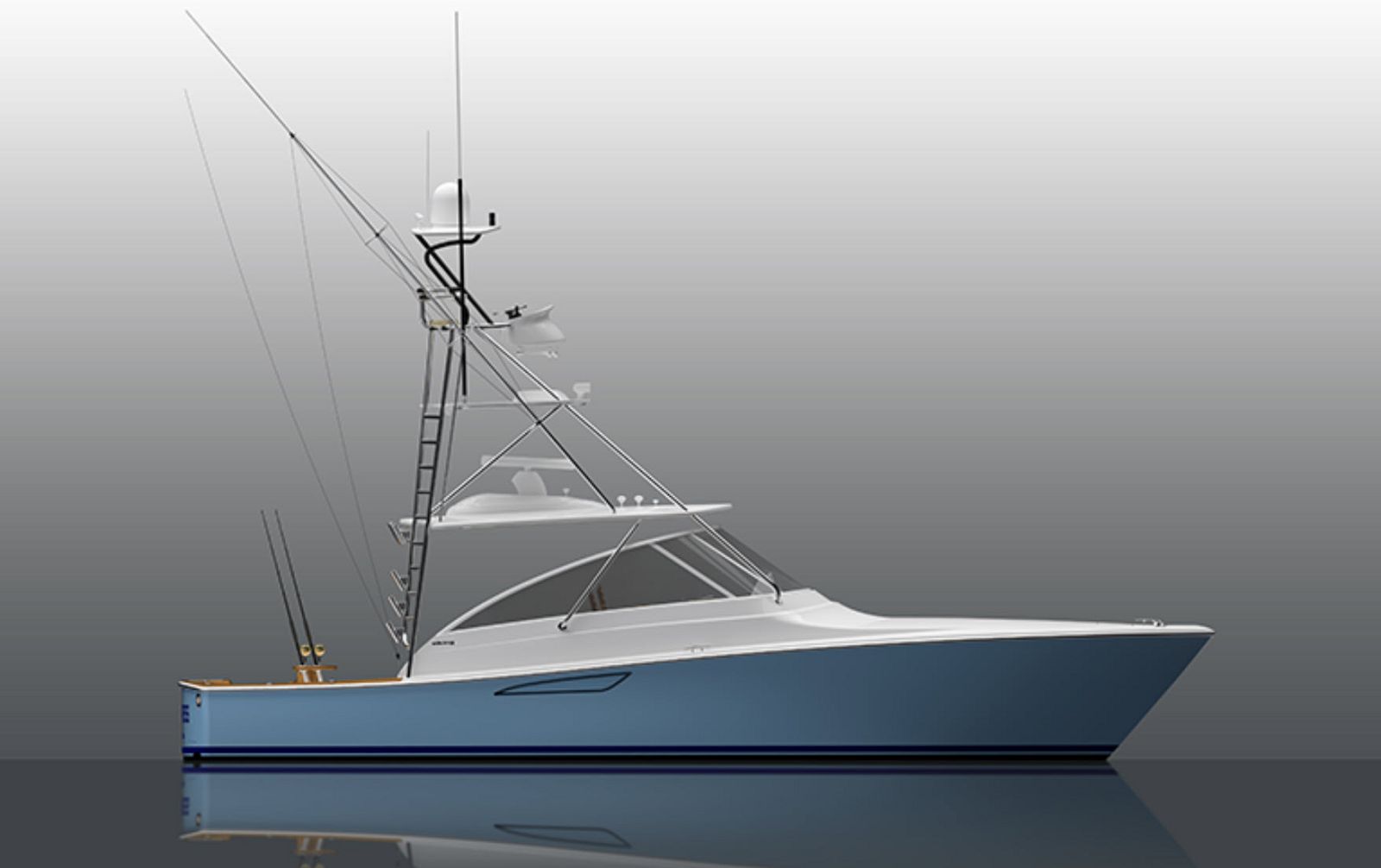 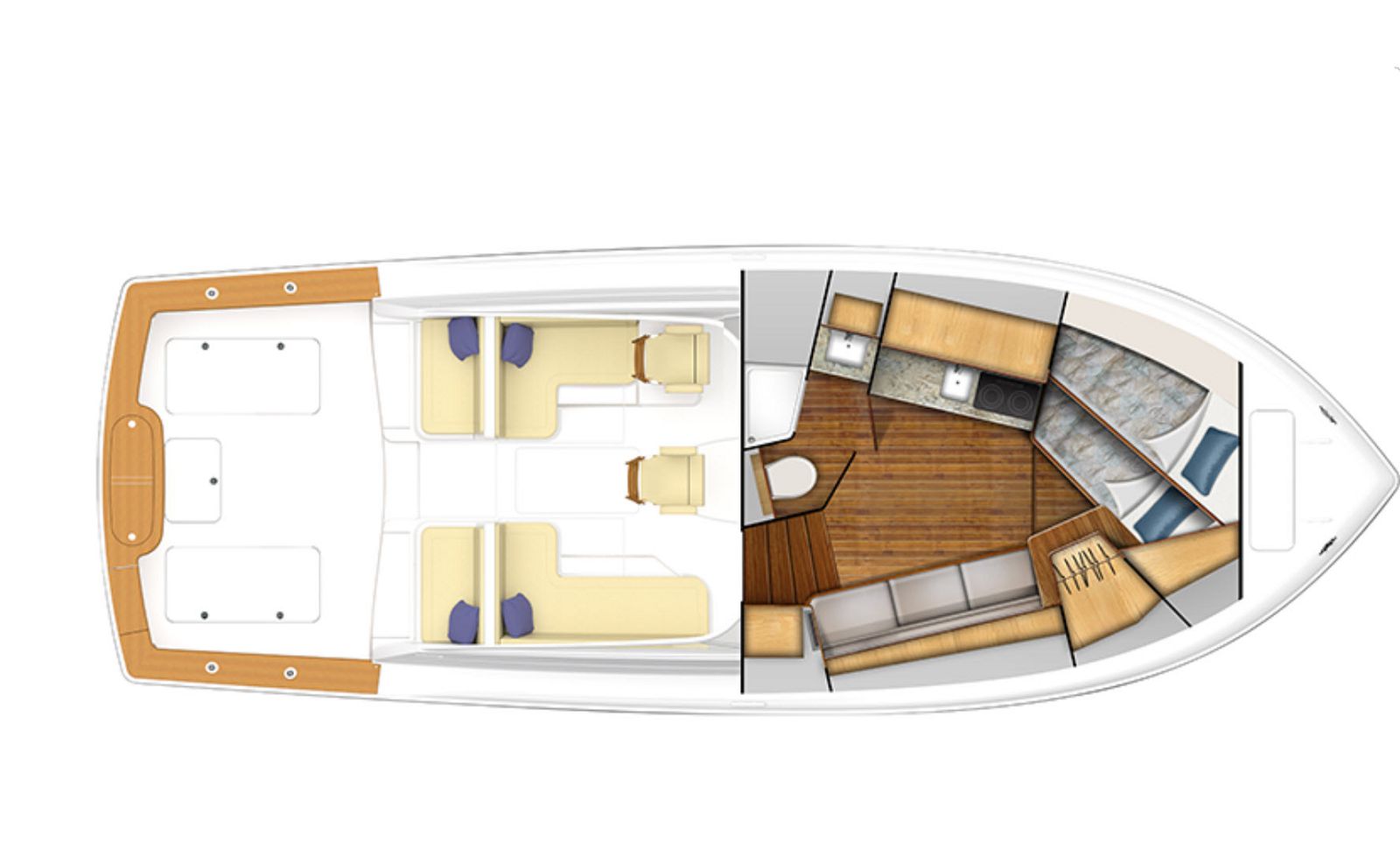 As you can see, the command deck on the 38 Open also has plenty of seating with big L-shaped lounges behind the helm station on both port and starboard sides. The two helm seats are behind the command station which is placed centerline for unobstructed views around the boat. The accommodations are similarly laid out to the 38 Billfish, although the stateroom in the 38 Open has one double bunk below an upper single bunk and the salon features a starboard sofa. Details are still scarce on the new Viking 38 Open, but SI Yachts will make sure to keep you informed as new information and photos become available. 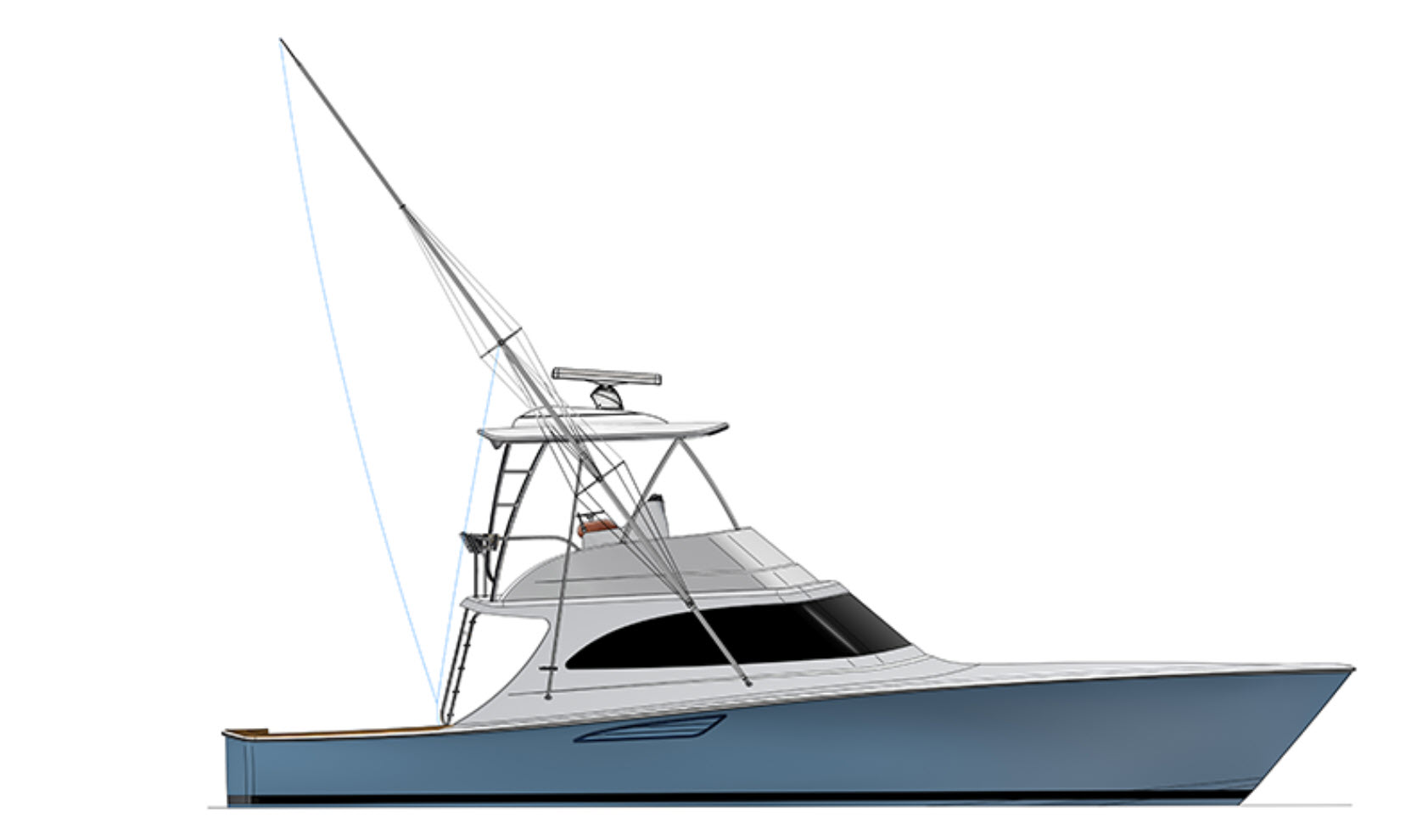 We don't have many details on the new Viking Yachts 46 Billfish, but we have seen the rendering and she looks sleek! With the popularity and success of the Viking 37 Billfish, the demand for a larger sportfish that was still easy for the owner/operator and had the same functionality was only a matter of time. "The 46 was a natural progression for the Billfish," says John Leek IV, General Manager of Viking Mullica where the Billfish series is being manufactured. "Our customers really grasped onto the philosophy behind these boats."

To learn more about the available Viking models being built today, visit our new Viking Yachts For Sale page to explore everything from the 37 to the 93 Motor Yacht. Also read about the new Viking Yachts 58 Convertible Gen II and Sportfishing Perfection with the Viking 68C.