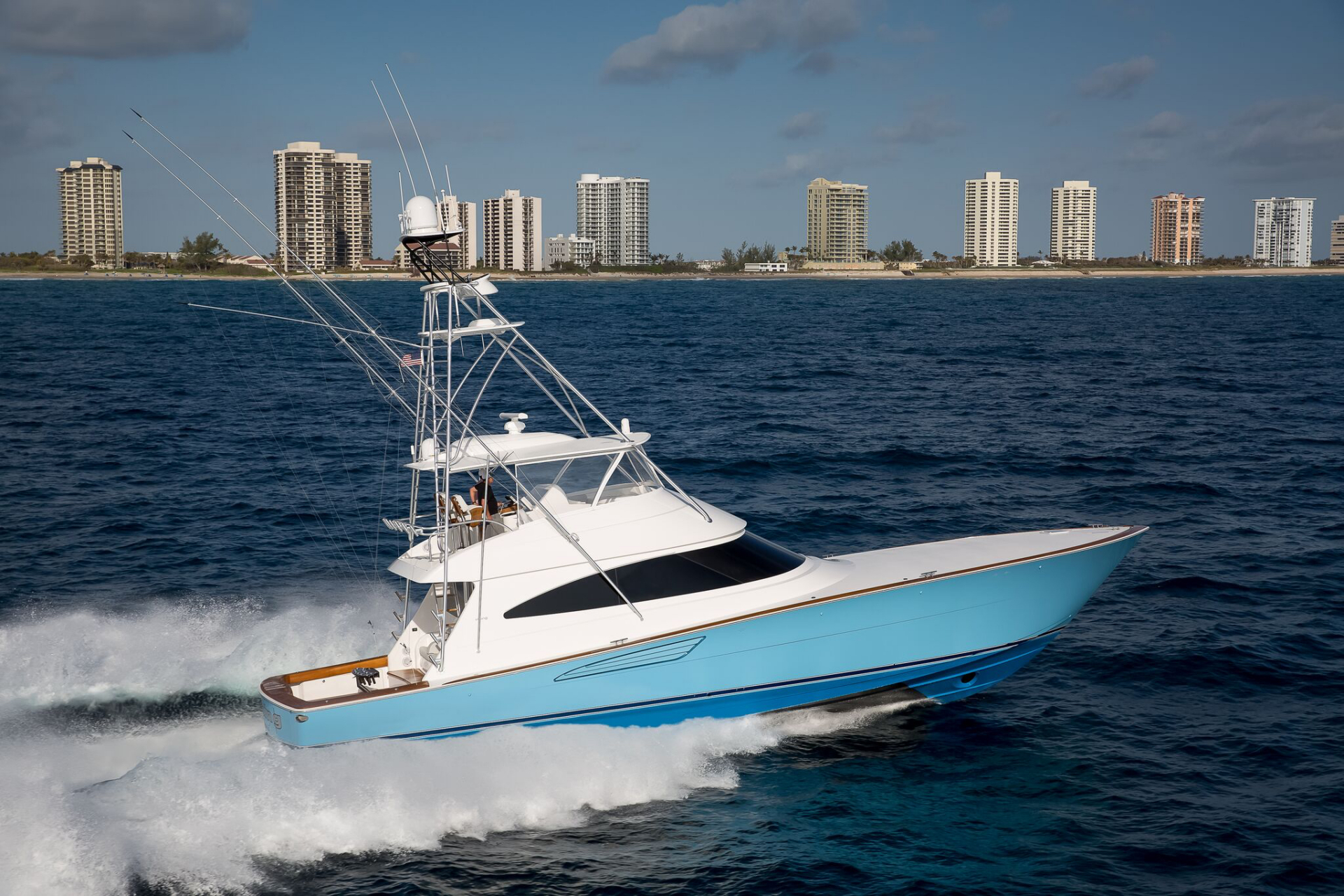 The new Viking Yachts 68 Convertible is absolutely stunning. From the extra large cockpit, to the sleek lines, and hardcore tuna tower, everything about the 68C screams fishing perfection.

(Update on June 2nd, 2019) Video of the Viking 68 Convertible running was just released by the marketing team at Viking. She is truly a specatuclar sportfishing vessel designed to slay the seas and the fish.

The team at the Viking Yachts factory have been busy launching new models recently with the debuts of the 93 Motor Yacht, 44 Open, and 37 Billfish all receiving acclaimed reviews from customers and magazine editors alike. Pat Healey, Viking’s President and CEO, has led the company to invest over $50 million in research and design over the past several years and the results of that commitment have now started to come to fruition. For the tournament angler and Viking traditionalist, the new 68 Convertible is perhaps the most exciting new development since the 80 Convertible first splashed. “This boat is going to be a big hit,” says Viking Design Manager David Wilson. “We were able to bring some of the attributes of our larger models to the 68 while maintaining the efficiencies of a smaller sportfishing boat.” Viking’s mantra with their sportfish models in the past several years has been to focus on speed and “fish-ability” while also creating a comfortable and spacious interior. Not only does this allow anglers to get their rest during a multi-day billfish tournament, but it also converts the Viking into a comfortable cruising yacht when needed for when the family is on board. 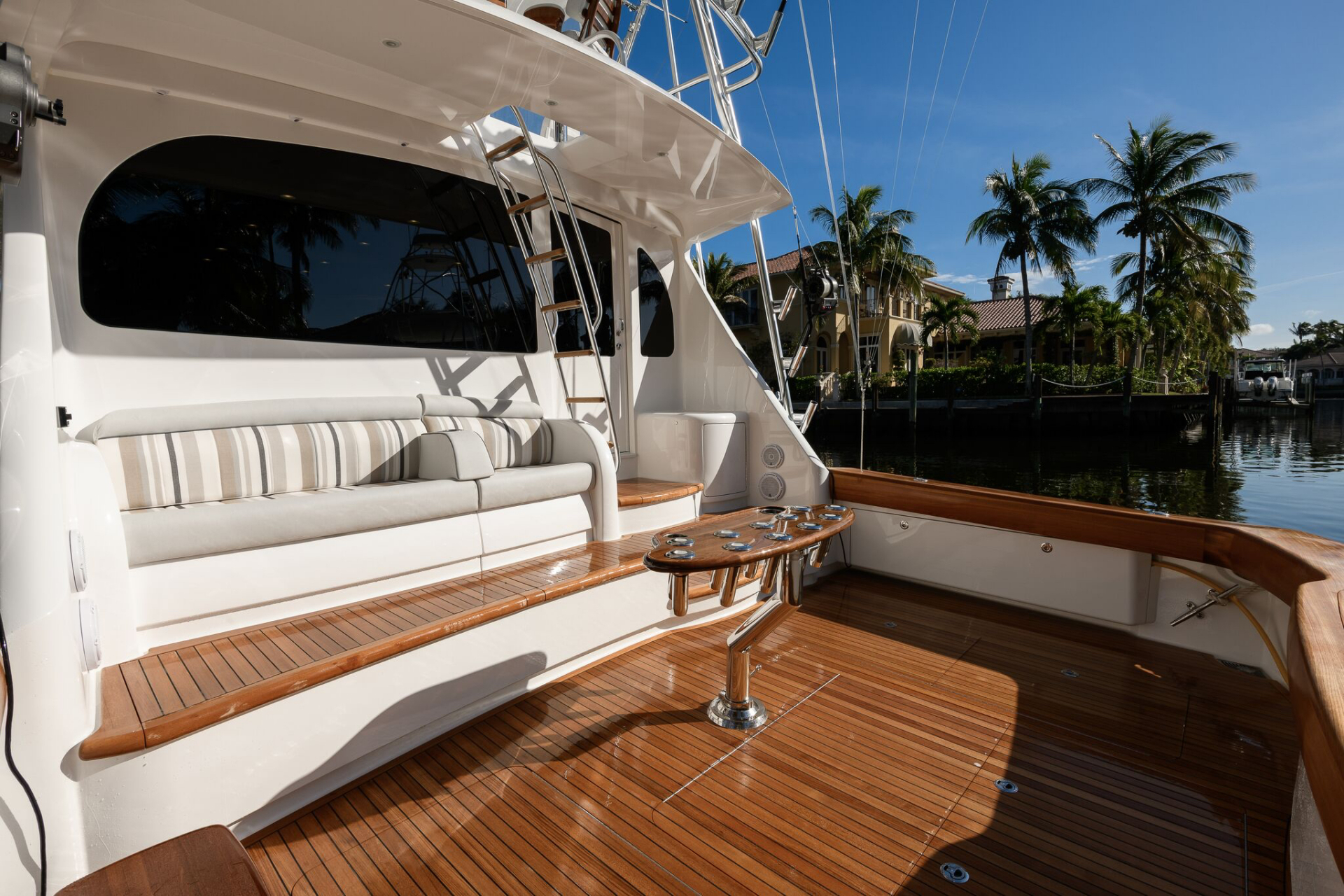 If the new 68C is going to be considered for your first Viking purchase, we recommend you read "Your Resource Guide To Owning A New Viking Yacht."

176 square feet. Let that sink in a minute. The massive cockpit on the Viking 68 Convertible is a fisherman’s dream. At 176-square feet, there is plenty of room for multiple crew to move around the fighting chair during a tense battle with a giant marlin. There is an aluminum reinforcement plate where the fighting chair is placed on the expansive teak deck along with all of the possible fishing amenities you could ask for including flush rod holders, plenty of storage for gaffs and tackle, an in-deck fishwell with a macerator pump discharge, and a circulating livewell. And of course, the 68 Convertible comes with Viking’s signature observation mezzanine. These comfortable, shaded seats put the guests right in the action to cheer on their favorite angler. The cushions are Sunbrella-covered and hide additional tackle storage and a bait freezer beneath the seats. 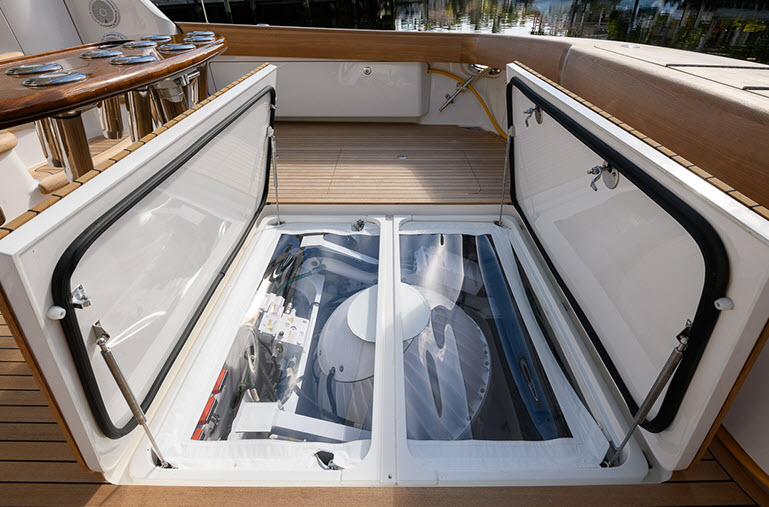 For the ultimate comfortable ride, the deck of the Viking 68C was specifically designed to be able to house a Seakeeper Gyro stabilizer. Not only does this help while fishing in rougher seas, but cruising with the family will become even that more enjoyable. Read more about 4 new Viking models that will make their debut in 2018. 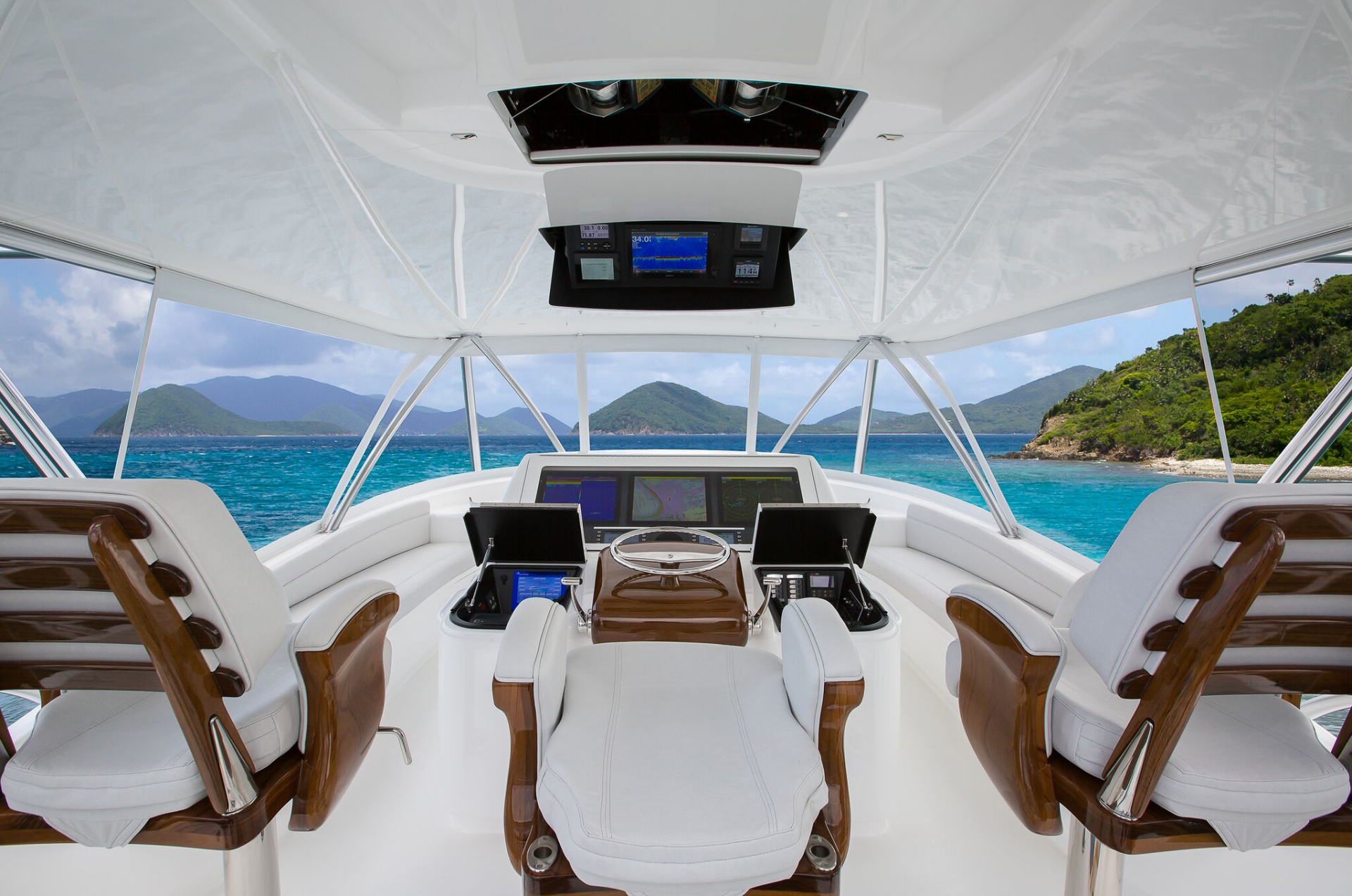 The flybridge on the Viking 68 provides amazing views from the helm which give the captain full 360-degree visibility. The helm station is centerline on the bridge which also provides for a good view of the cockpit and all sides of the boat. The electronic trolling valves give unprecedented control when on the hunt in the trolling grounds and extra fishing rod storage under the seats keep everything stowed and out of the way. There is even an additional freezer and more bench seating forward of the helm. As an option, anyone looking to do a bit more cruising than fishing can opt for a climate controlled staircase that leads into the salon. 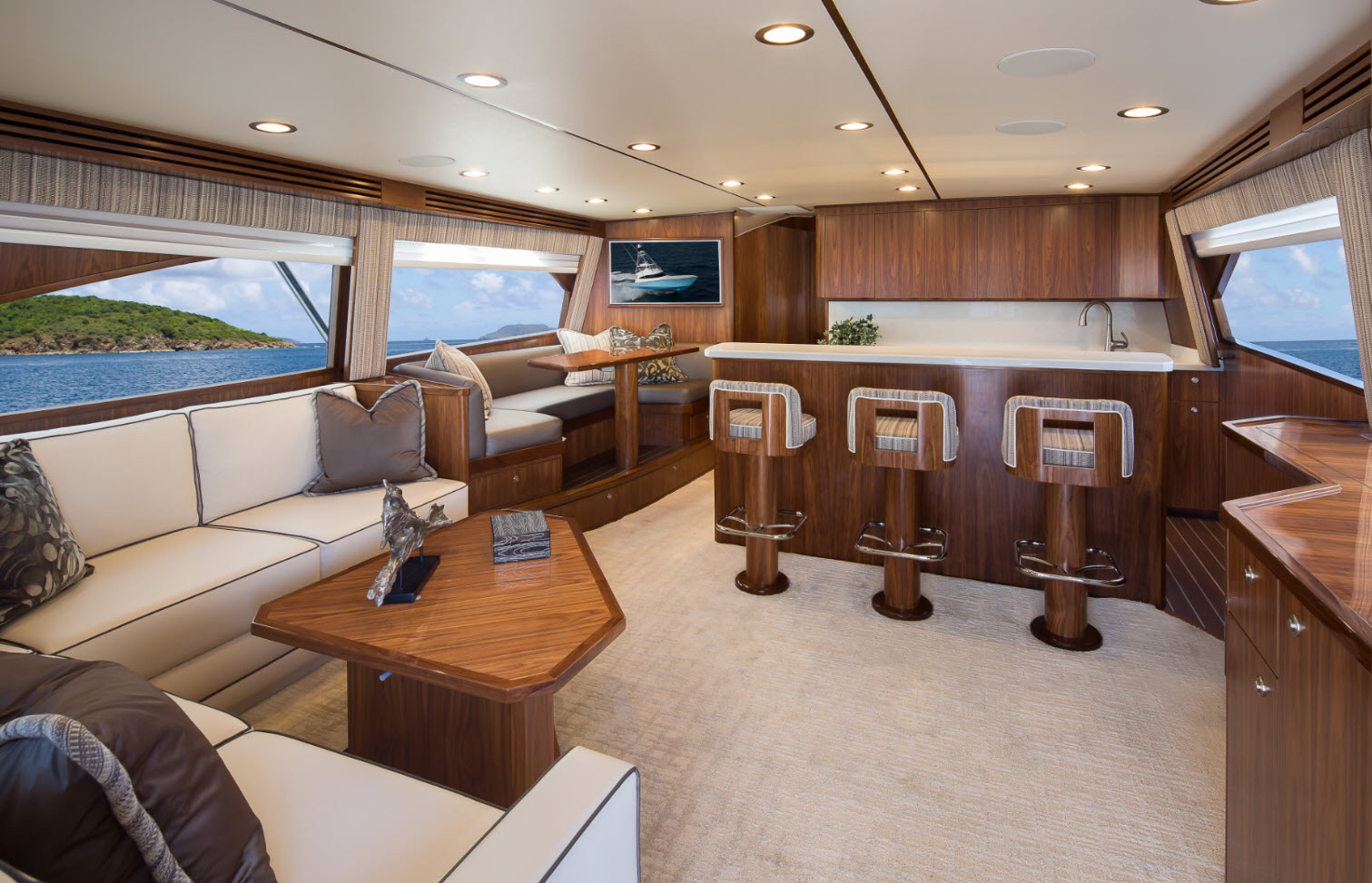 Walking into the salon through the electronically operated doors, the large port and starboard windows and the light they bring in is immediately noticeable. The 19’ 2” beam allows for much larger accommodations inside the 68C than most sportfish of similar size and class. A L-shaped couch and table provide plenty of seating indoors across from a 49” pop-up television that can retreat into the walnut cabinetry. Guests and owners will appreciate the day head with cockpit access to avoid getting the carpet in the salon wet. The powerful air conditioning flows from hidden vents that also reduce noise. 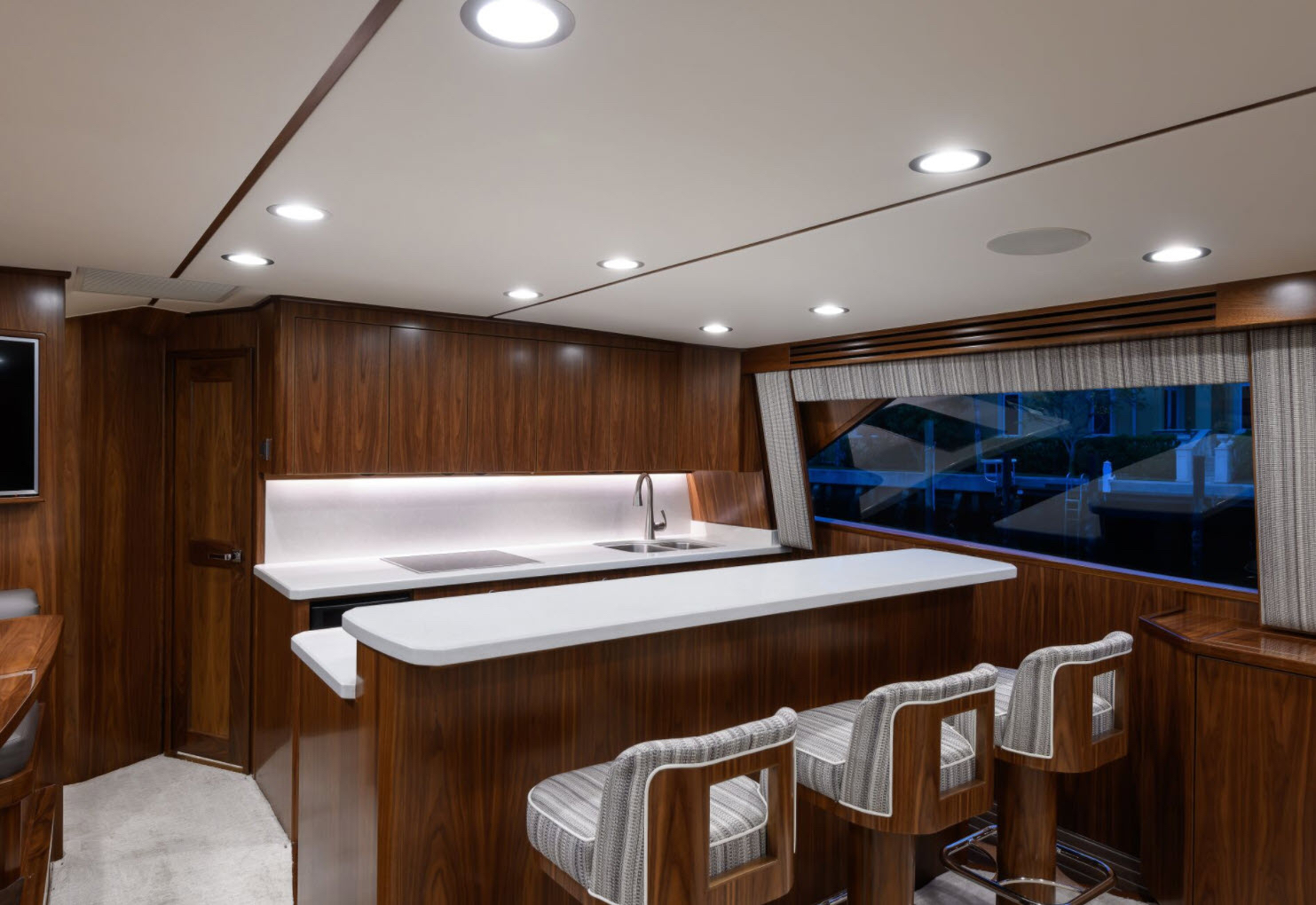 The open design of the 68 Convertible’s interior allows for a spacious galley and dining area adjacent to the salon, so even the appointed chef can be a part of the socializing going on inside. The galley is loaded with the most modern, top-end appliances including Sub-zero, under-counter refrigeration and pull-out drawers on aircraft-type slide mechanisms that lock in place for safe keeping. Four adults have more than enough room to sit in the dining area adjacent to the galley and other guests can sit at the bar-stools at the island galley countertop. 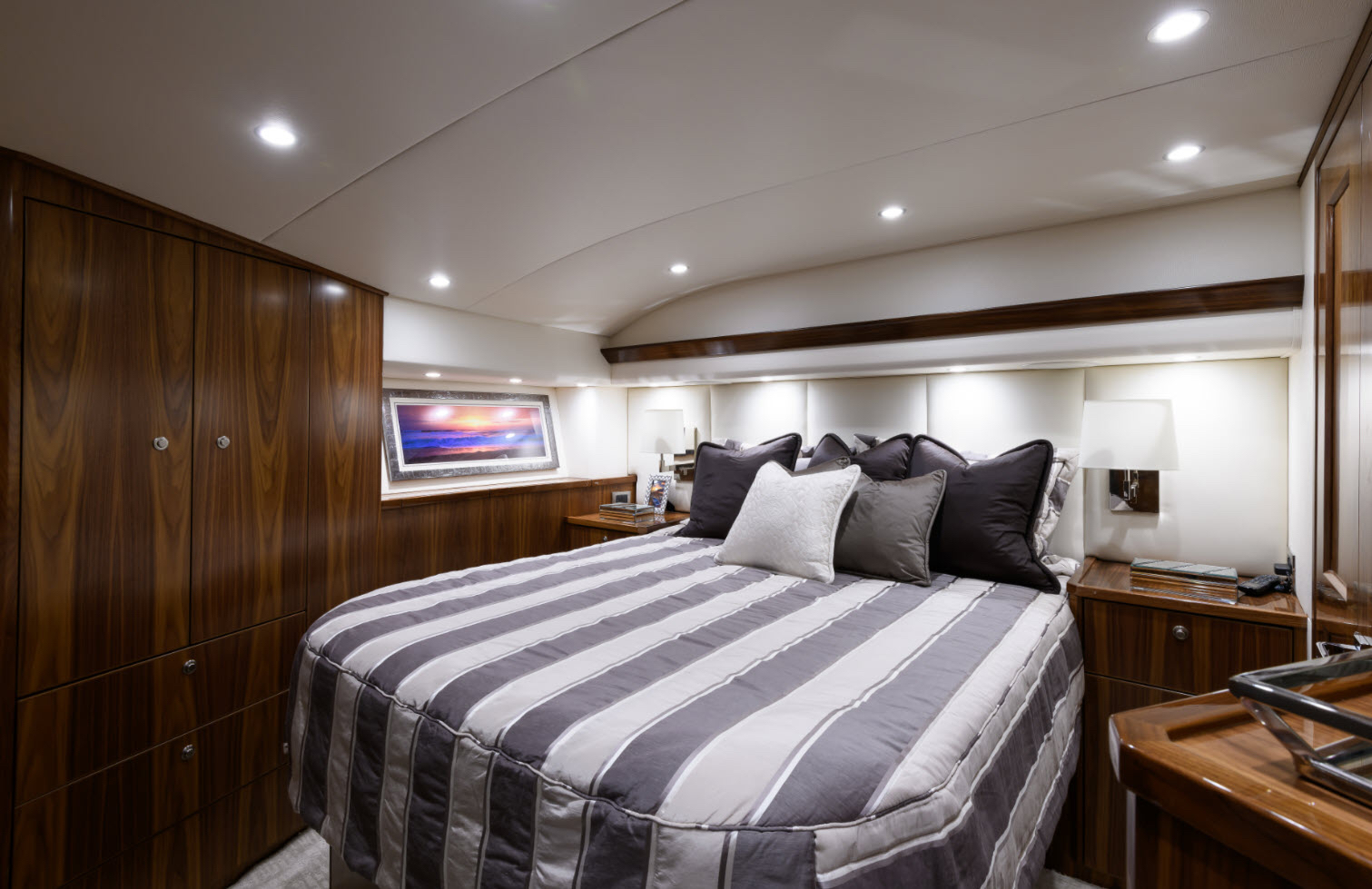 The four-stateroom, five-head layout of the Viking 68 Convertible offers every guest on board maximum comfort and privacy for those extended fishing trips or tournaments. The master stateroom is placed amidships and takes full advantage of the large beam which provides room for extra storage and his-and-hers hanging lockers. The queen-sized berth is comfortable with a nightstand on both sides and lots of room to walk entirely around the bed. Lift up the mattress for extra hidden storage! The VIP stateroom is placed forward on the boat with ensuite head and a queen-sized berth. Two additional guest staterooms on the boat feature over-under bunks that are big enough for adults and lots of fun for kids staying on board. Crew quarters are discretely located via a set of steps off of the companionway to the bedrooms. 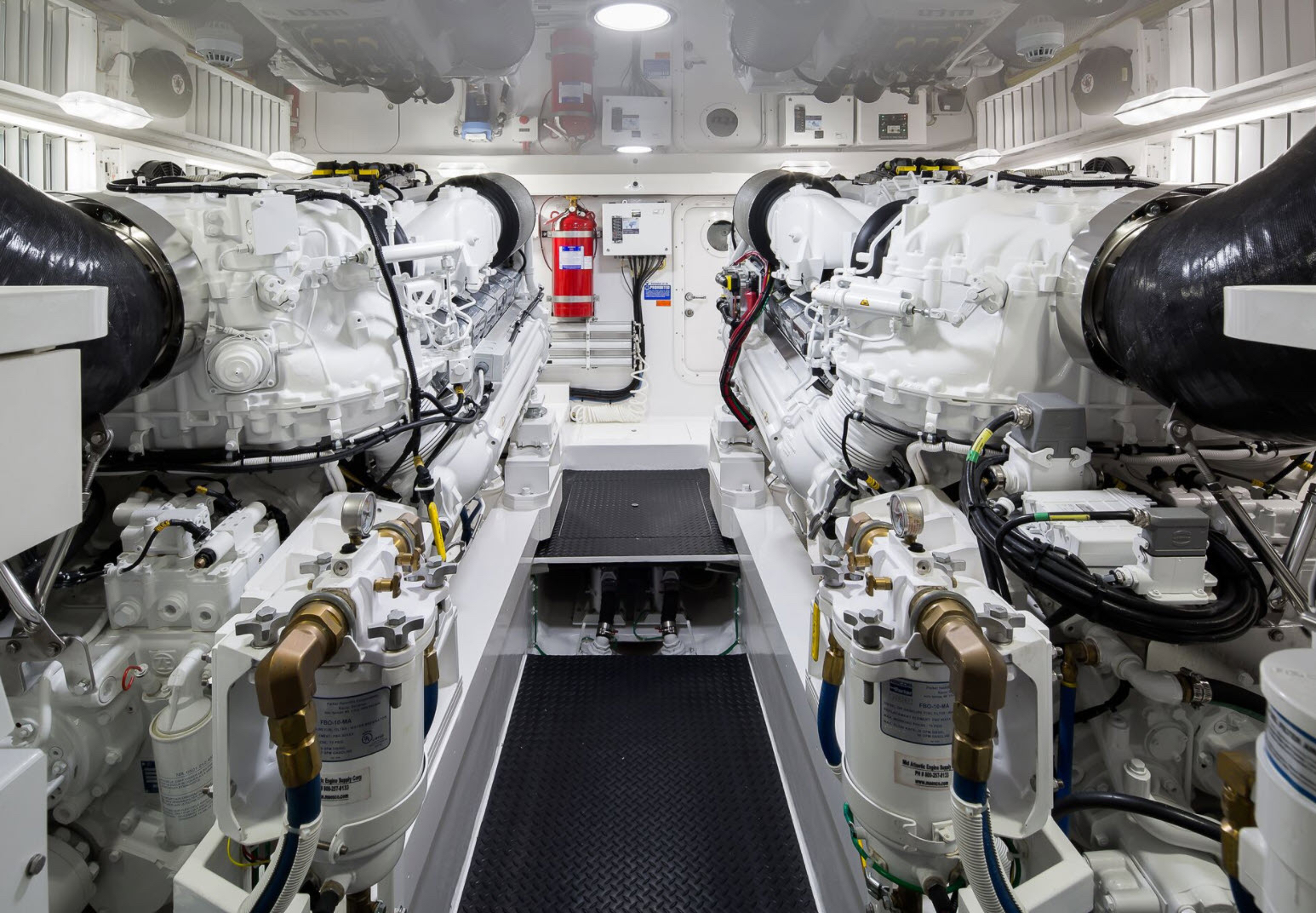 The 68C wouldn’t be a Viking sportfish without power and speed. With a 35-knot cruise and a top-end speed of over 40 knots, anxious anglers will be able to get out to the fishing grounds in no time and with the comfort of Viking’s incredibly strong hull. For propulsion, the Viking team chose twin MTU Series 2000 V12 1,945-HP diesel engines and housed them in Viking’s cutting edge powder-coated web-frame structural-steel engine beds that are mounted to reduce vibration. The engine room features plenty of space to walk around and stand up which makes service much easier. And with a standard fuel capacity of over 2,000 gallons and the option to add an additional 400 gallons, the Viking Yachts 68 Convertible can keep you fishing longer.

Check out the new 68C cutting through the waves on a rough day near Palm Beach!