Is Viking A Good Yacht? 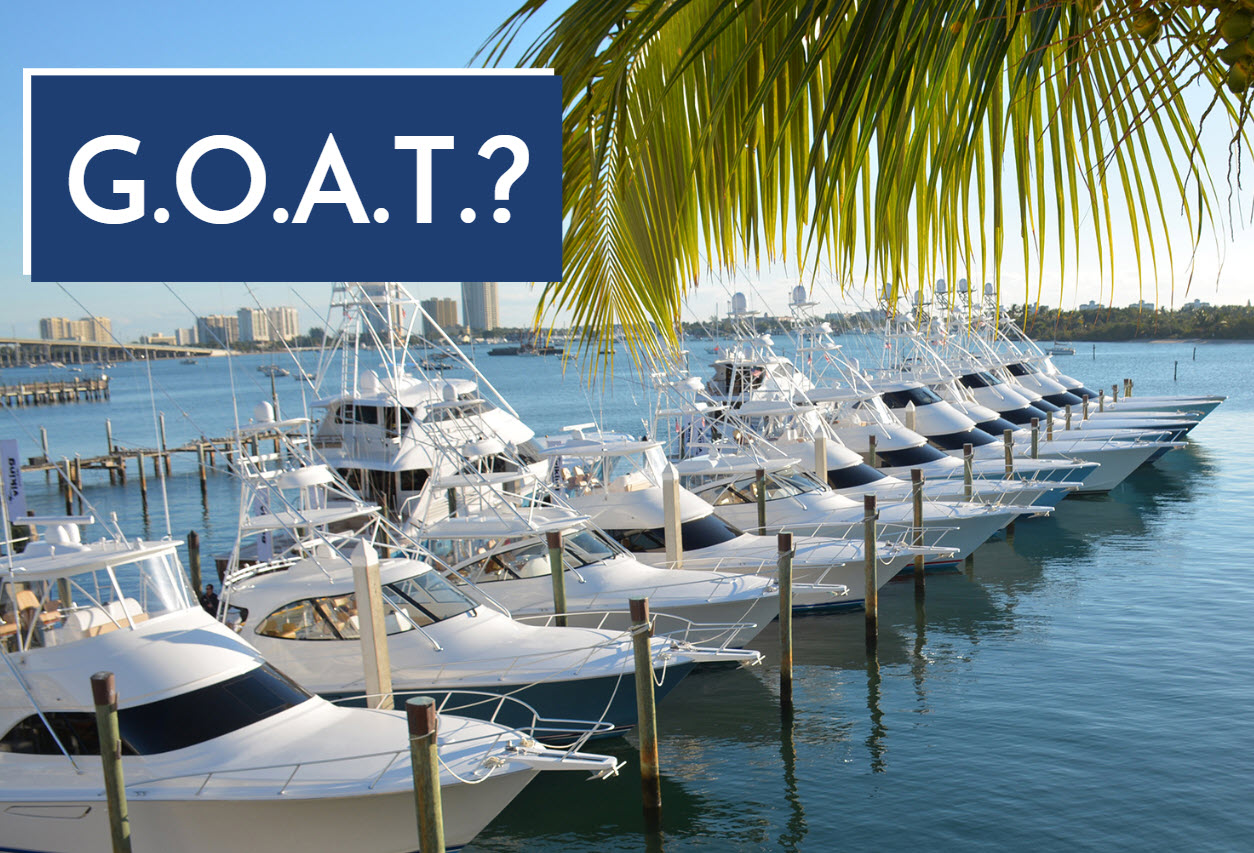 Popular among tournament anglers for their performance and accommodations, Viking Yachts continue to be the best sportfishing boat built today.

The idea of being the best at building a sportfishing boat is a relative thing. Is the best sportfish the one with the most advanced electronics or the most expensive materials? The most tournament wins? The most sales over a time period? What might be the top yacht to one angler chasing sailfish off of Stuart might not have the same attributes for a boat owner trolling for Black Marlin off of Cairns. But what about the boat builder that can consistently produce multiple models across many size ranges, with features to match the angler's preferences, provide many options to customize the vessel, and do it all at an incredible level of high quality? The team at Viking Yachts can.

From 38 to 90 feet, the prolific builder located right in the U.S.A. offers specific styles for your needs including convertibles, yachts with an enclosed bridge, express style boats, and models with sport towers. Viking's center-console line, Valhalla Boats, are also considered as the 'Rolls-Royce' of outboards boats.

Viking Yachts are the best sportfishing boat manufacturer because of the fact that over 90% of each model is built in-house, giving the team unprecedented quality control and superior construction capabilities. No other sportfish builder has sold more boats than Viking Yachts in the last two decades.

Why are Vikings so good? Here are 10 reasons you should consider purchasing a Viking from SI Yachts:

1. The Viking shipyard is a leader in manufacturing in the boating industry.

The Viking factory is located in New Gretna, New Jersey and is a main source of employment for much of the local community. Nearing 60 years in business and closing in on 5,000 boats delivered, the Viking shipyard is a marvel of manufacturing capabilities. The Viking factory spans over 800,000 square feet, has its own water supply, an infirmary for its employees, and it produces almost half of all the electricity it uses on-site through microturbines that produce clean energy. In recent years, Viking has invested millions of dollars in cutting-edge equipment to perfectly mold their hulls, an advantage that no other sportfish builder has been able to match. 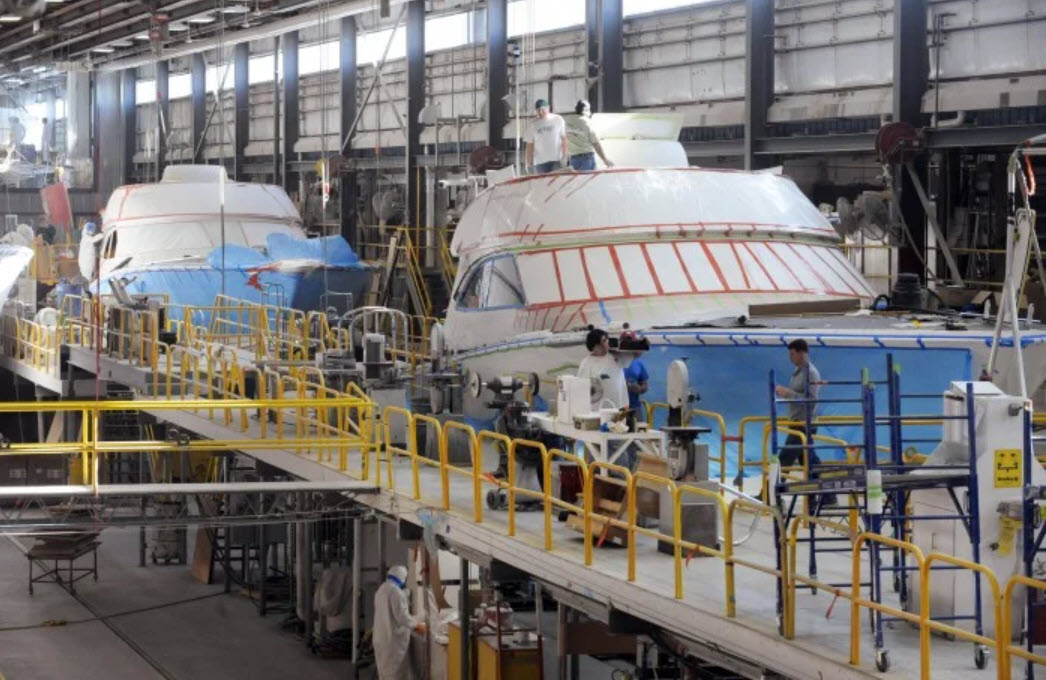 There simply is no substitution for real world experience when it comes to building a boat, particularly one that will be used hard to back down on a 1,000 lbs. marlin. Enter any major fishing tournament across the United States and you will find multiple Vikings in competition. Viking has even created a demo program which are used to gain valuable knowledge of how each model performs under various, real life situations.

Captain Ryan Higgins was recently interviewed in Marlin Magazine about how the demo program, along with owner comments, has influenced design and production of different models: "And we try to run Hull No. 1 of each new model as a demo, which gives all of us a chance to spend time on the boat and actually live on it. We keep a notebook on board where the crew can make notes on things they’d like to change, anything from more storage in the crew quarters to another 6 inches at the foot of the bed in the master stateroom. We noticed that some of the other builders were starting to push the envelope on ­performance while we were fishing tournaments on the demos, so that led us to making all kinds of small tweaks to our 70-footer: less hull resistance, lightening the build, using honeycombed interior panels. It wasn’t one little thing but more like a dozen things; from the first 70 demo to the last, we reduced the weight by nearly 10,000 pounds and improved performance by around 3 knots to reach speeds of over 45 knots."

3. Viking has the latest design software and technology leading to unmatched performance. 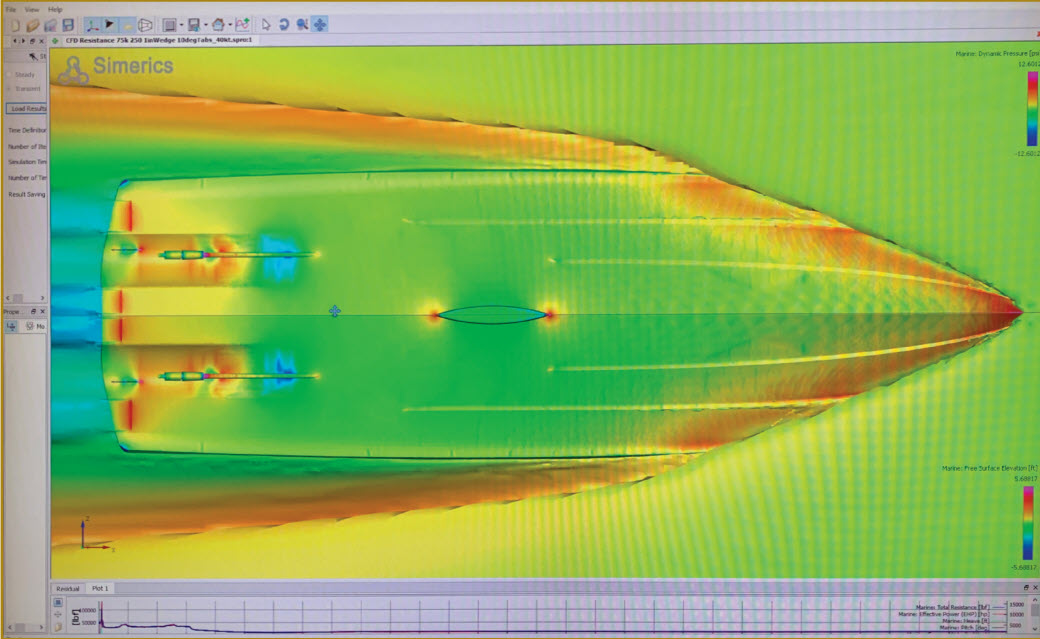 The design team at Viking has as the latest and greatest in Computational Fluid Dynamics (CFD) software technology that helps to create and perfect the hull of each boat. Using this software from Orca3D, every model is run through numerous sea trials virtually. This means that the Viking team is able to make tweaks to the hull design prior to being built and actually tank tested in real life once built. The CFD program measures attributes like effective horsepower, total resistance, the vertical rise of the center of gravity, the angle of the trim, and even the pressure distribution across the boat's bottom. "The advanced software at the Viking factory gives them a huge advantage over other builders," says Rich Lucas, Viking Brand Manager for SI Yachts. "Running multiple virtual sea trials a day while building a model allows them to make adjustments to the hull shape which result in improved efficiency and performance." Viking has used the CFD software on newer models like the 64 Convertible and the new flagship, 90 Convertible.

4. Big investments in infrastructure and equipment have paid off.

There is no denying that Viking has heavily invested in the best possible equipment and machinery at the shipyard so that it can maintain its position as the leading sportfish builder worldwide. For example, Viking purchased a 5-axis CNC router and milling machine which assists in building out very specific shapes in the cockpit, mezzanine, command deck, and other areas of each model. Hull shapes designed for exceptional performance and efficiency, for both Viking and Valhalla center-consoles, are now created using this CNC router. Below is a video showing how the hull of a Valhalla V-37 is created:

The Viking Mullica factory, which is in close proximity to the main facility, is receiving an additional 12,000 square feet of manufacturing space to help produce all 5 Valhalla models. Viking expects approximately 100 Valhalla Boats to be completed this fiscal year.

5. Viking builds and installs its own parts at its shipyard.

For more than 30 years, Viking has produced its own parts which has contributed to the impressive level of quality control and functionality found in every vessel delivered. "We wanted the best of the best. So, we took control and did it ourselves," Pat Healey once said in an interview with Yachting magazine as to why Viking had a parts assembly department. From cabinetry, to fuel tanks, to furniture and other carpentry needs, the Viking team is able to create the parts needed to create the best possible experience.

According to a press release with the NMMA, Viking even converted its parts division to create over 1,000 medical face shields there were provided to different facilities.

6. Every Viking model is resin-infused with the highest quality materials. 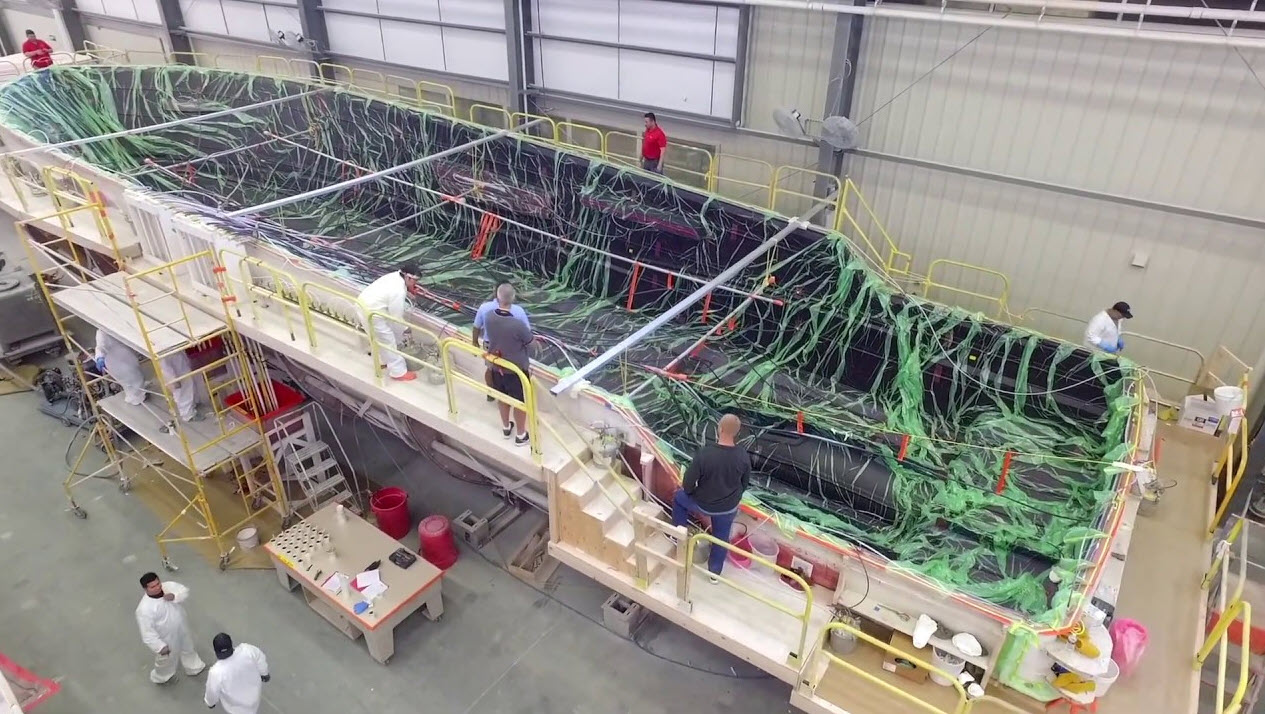 At the time of its launch, the Viking 92 Convertible was the largest resin-infused sportfishing boat in the world. This designation will also be carried on by the 90 Convertible. Today's models are constructed using  an engineered composite of fiberglass fabrics and coring, which is then vacuum-bagged and infused with high-quality resin. As the air is sucked out of the bag, the resin soaks into the pores of the hull material creating an incredibly strong hull once dried. The resulting performance improvements from constructing boats using a resin-infusion method are undeniable. Vikings are lighter, faster, plane more quickly, and handle better than comparable boats that are fully made of fiberglass.

7. Viking uses its own subsidiary company, AME, for electronics installations.

While the Viking factory does manufacture and install 90% of the boat in-house, they do not build the electronics. For that, Viking leans on its subsidiary company Atlantic Marine Electronics (AME) who is a leader in state-of-the-art navigation communication, and on-board entertainment equipment. With a presence at the New Gretna facility, at the Viking Service Center in Florida, and other locations in strategic areas to support Viking owners, AME knows how vital your electronics are to your fishing needs and safety for everyone on board. From essential equipment like the multi-function displays and AIS system, to cellular satellite communication systems, to full television and stereo packages, Viking owners can have faith that the very best, most experienced team in the world is creating an exclusive electronics package for their boat.

8. Palm Beach Towers, another Viking subsidiary, constructs the perfect tower for your needs. 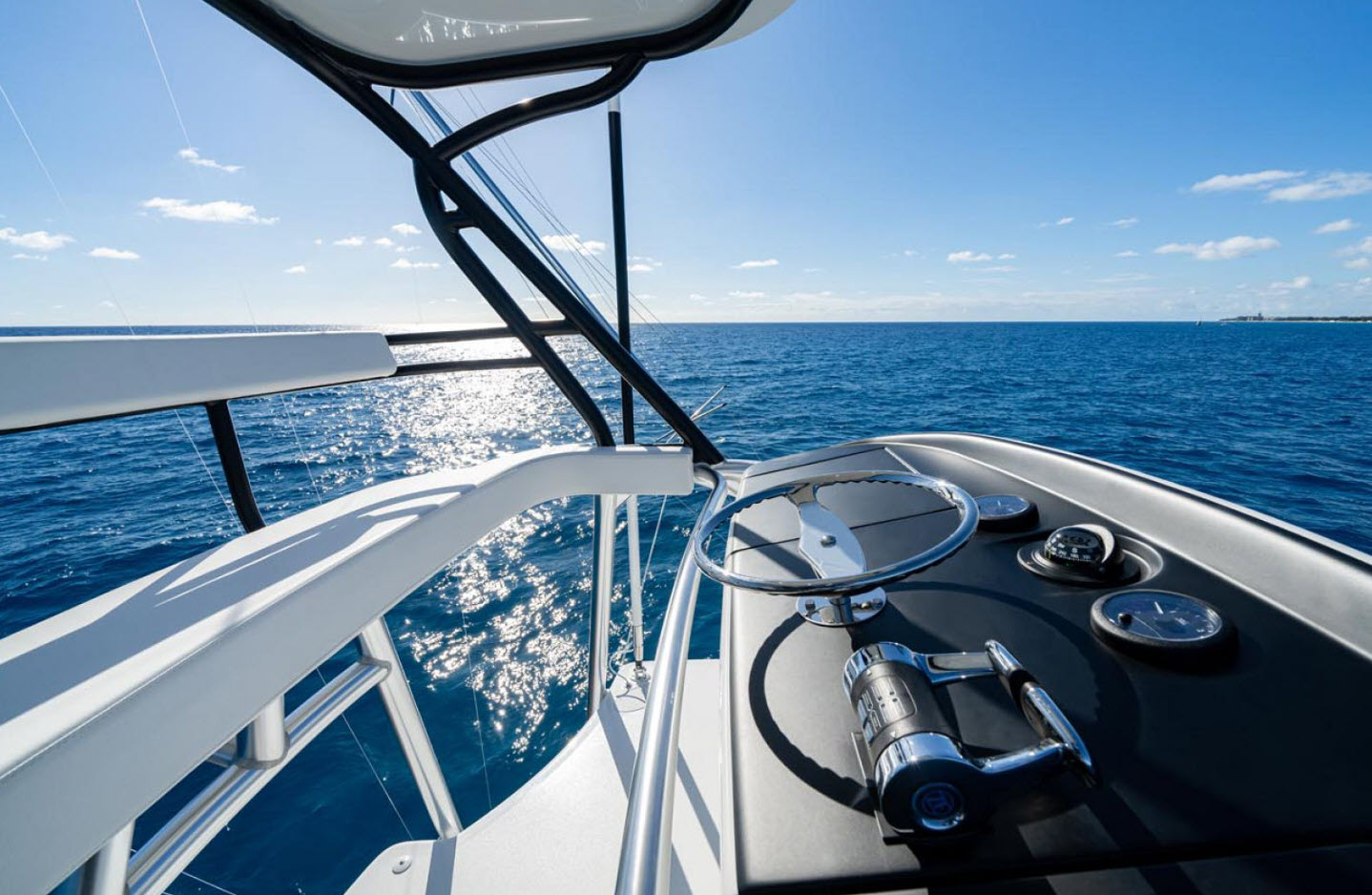 Whether you are purchasing a brand new boat or looking at a used Viking on the brokerage market, Viking's subsidiary Palm Beach Towers can handle both the construction and installation of the perfect tower. With convenient locations in both New Gretna and in Riviera Beach (near Viking Service Center), installation of a tower is convenient whether ordering your boat new or having it in for annual service at a Viking facility. The team at Palm Beach Towers are experts at custom-designing tuna towers, express towers, and fiberglass hardtops. There is nothing more exhilarating than driving your Viking from the controls on your customized tower.

9. Vikings are proven fishing tournament winners that many captains and owners love.

No matter what major fishing tournament you attend, you are bound to see multiple Vikings competing for first place. Most recently, a Viking 72 took third place at the 2022 Gold Cup tournament, another Viking first place at the Mongo Combo, 'Most Points' at the MidAtlantic were awarded to a Viking 80, winner of the Los Suenos Triple Crown series was another Viking 72, and the list goes on. SI Yachts founder Frank Bongiorno owns a Viking 58 which also regularly competes down in Costa Rica. Seen below, the team recently took second place on Day 2 of Leg 3 of the series. 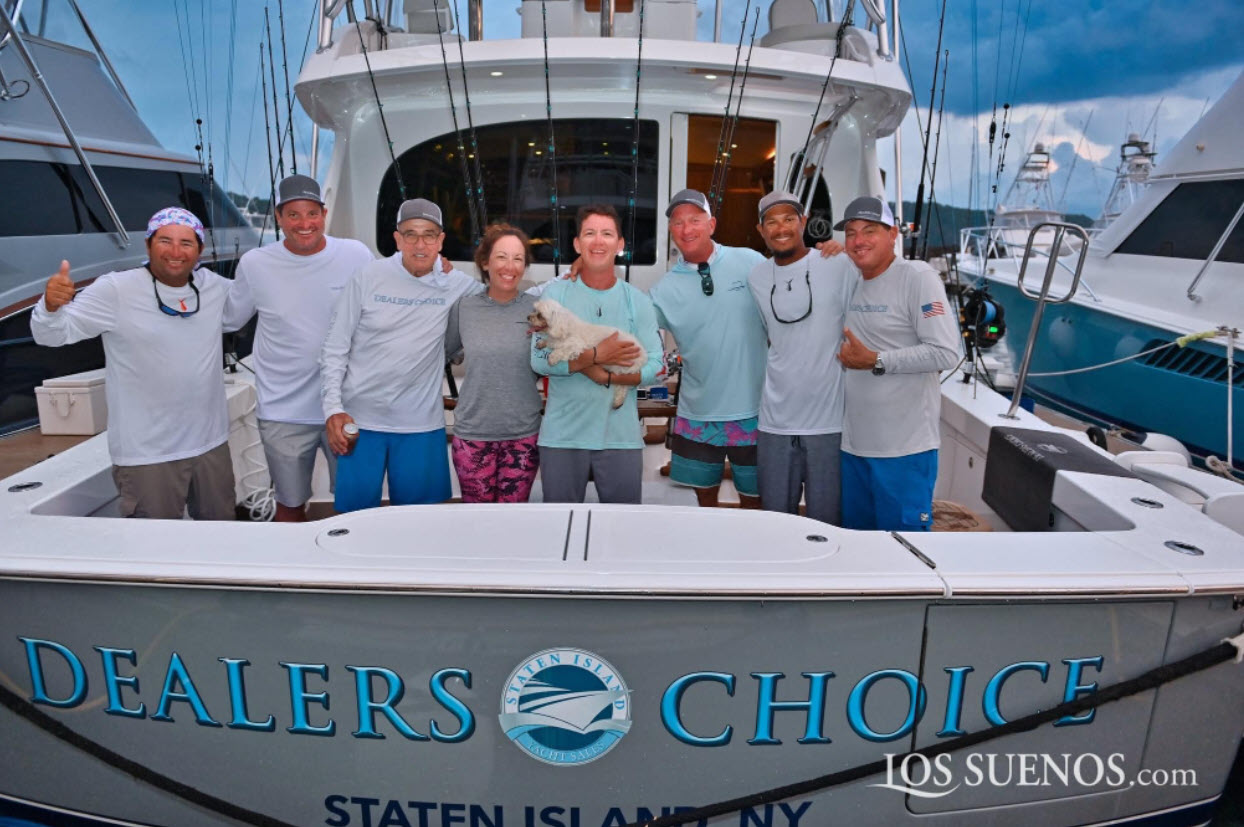 10. The 'X' Factor for Viking Yachts is Pat Healey. 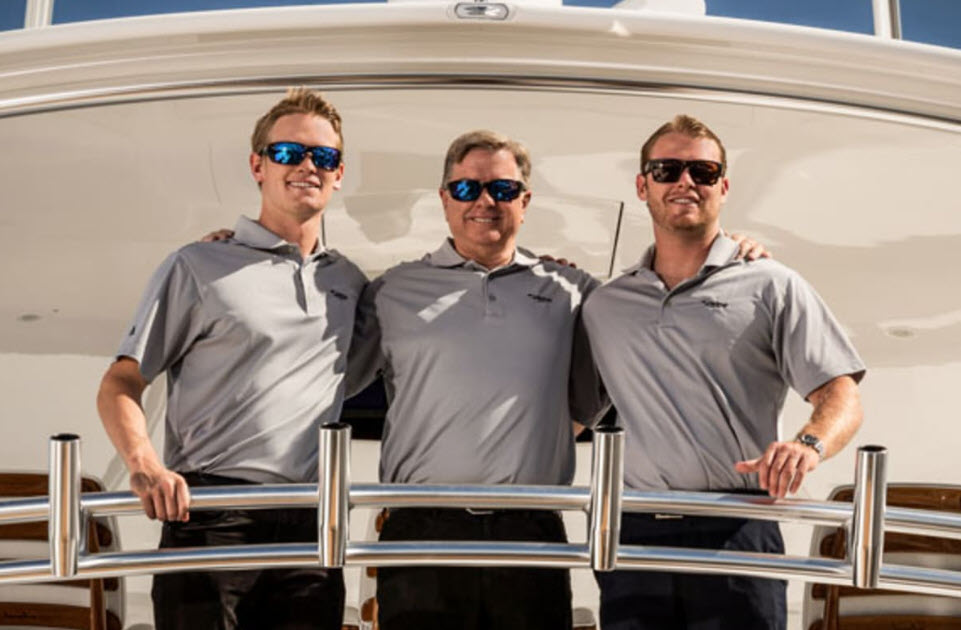 Bass Pro Shops has Johnny Morris. Tesla has Elon Musk. Viking has Patrick Healey. Behind most successful companies is an entrepreneurial leader that protects their employees, drives innovation, isn't afraid to take risks, and invests their heart and soul into the business. For Pat Healey though, going to work at Viking isn't just about 'Building A Better Boat Each Day', its ensuring that Viking remains the leader in the industry as he passes the torch on to his two sons, Justin and Sean, just as the torch was passed to him by his father and uncle. Under Patrick's leadership, Viking has flourished as the leader in the production of sportfishing boats, and now center-console boats with Valhalla.

So where does Patrick see the future of Viking headed? "Diesel-hybrid technology", he confidently proclaims. "I can envision running to the fishing grounds on your mains, then shutting them down and ramping up a variable-speed diesel-electric generator. You could then troll all day on electric before running back home on the mains. That could cut engine hours by 70 percent, which alone is huge. But there’s also the potential to use the electric with the mains to get extra horsepower." Giving us a little inside information, Pat says Viking is already working with engine manufacturers on producing it, but it will be several more years before the propulsion technology is perfected. When it is, you can bet Viking will be at the forefront.

As one of the oldest Viking dealers in the world, SI Yachts is strategically positioned to assist you in customizing your own Viking, securing a build slot with the factory, buying out of our existing inventory, or finding a pre-owned Viking on the brokerage market. If you love Viking Yachts like we do, let our team of factory-trained experts assist you in your boating plans. Call our main office today at 1-718-984-7676 or email us at sales@siyachts.com to get started. We can even take your existing boat in on trade towards a new Viking or Valhalla!

Enjoy these other Viking-related articles: